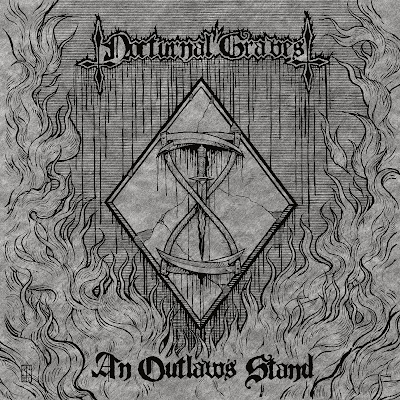 Falling somewhere on the more extreme end of the metal sphere, there are elements of both black and metal found in the aggressive attack of this Australian band.  Some of it drawing inspiration from the place in time when thrash collided with them at this dark crossroads. Thus, comparisons could be made to both Bathory and a more methed out version of Venom. For what this is the production is refined to create an organic raw sound paying homage to the late 80s when this sort of of thing first crawled up from the bowels of hell, while granting them a sonic place next to bands like Watain. The vocals are not as deliberate as Watain, the croak is more feral, and chaos runs a little wilder in the frenzy they attack their instruments with here.

Not as familiar with their first three album it does feel like a more of an effort was made here in the song writing department. It makes sense former Destroyer 666 guitarist Shrapnel plays with these guys. Not as bullet belt metal as that band, they blend more closely with black metal bands. By the third song their straightforward attack finds a uniformity. The drumming is the most impressive element of the first three songs. They drop to more of a mid-paced death metal feel for " No Mercy For Weakness" which is certainly a sentiment I agree with.  I like this song but after this if things do not switch up dynamically, I will begin to get bored with the album. And as it happens the album begins to go downhill when such a change does not occur, and everything becomes a blur as the songs begin to sound the same. That is not to say a cool riff or two doesn't crop up on "Beyond the Flesh", however the rule around here is cool riffs alone does not a good song make.

The last song takes a stab at the black metal side of their equation. There is also a touch of Morbid Angel like death metal in the rapid-fire darkness of melody hidden in the riffs. Most of the Morbidity lies in the phrasing of the vocals These guys are good at what they do. What they do just happens to be a void filled by other bands, who do this with more sonic colors. If you like your metal very cut and dry in your face with no questions asked, you are a simpler man than I , though you will also enjoy this more than I did. I got bored in a few places but overall found this to be well produced, performed and entertaining for the listens I gave it so I will give this an 8.5