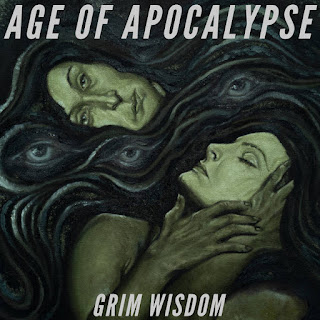 I am a little confused as to what is going on here, but I like. Crooned vocals offset what might be a rock n roll ringed hardcore album if the more typical shouted vocals were a thing here. Yes, it sounds like "River Runs Red" era Life of Agony to some extent. AFI could also be another reference point. The vocals are a little hookier in terms of the melody on the second song, The guitar is also more metal than hard core most of the time. The vocals get more aggressive on "Fury". As someone who is old enough to remember when Life of Agony came out, they leaned in a more Biohazard direction, but were never as aggressive as what goes down here though they did play faster. They are not a Life of Agony tribute band and once you get to this song that fact is fully beat downed into your head.

They pick up things to more of a thrashing speed at times on the title track and prove themselves capable of locking into a groove when they feel like. I how these guys show that being melodic and heavy are not two things that cannot exist at the same time. It is one of the heaviest albums with sung vocals that i have heard in a minute.  "Begging the Reaper" backs off on the heaviness and opts for more introspection. This is in a more 90s emo manner but with darker atmosphere.  "Rotten Kingdom" finds them finally speeding up to more of a punk pace. It is the first song that also does not connect with me on the first listen.  "Ghost" kicks you with a very powerful stomping groove. The vocals do not forget their purpose even in the heaviest chug that hits you. It commands you to bang you head that is how killer the riffs in this song are.

"Pain of Creation" offers another beating but with the metal factor in the guitar dialed as high as it can go before, they have to rip out guitar solos. The last song opens with what sounds like it is going to be a hard core beating them finds new melodic groove to twist into. This is an incredible album It comes out January 21st, on Closed Casket Activities my only regret is that I have to wait for the promo I can download and pop it into my iPod to listen to all the time, this is one of those discoveries that make doing this worthwhile. If you want some dark emotive metallic hardcore of sorts that pays homage to the 90s this is the band you did not know you were hoping to to find.  I give this one a 10 for sure.