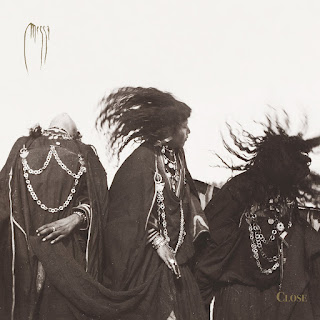 The opening track feels like a very logical progression in the next step of the band's songwriting, there are new tricks up their sleeve as forays into jazz and progressive rock color the dismal blues inflected exploration of their shadowy souls. The pace picks up on the second song which has a more rock feel before drifting into morose trippiness on the verse. It has a much more metallic attack than anything from "Feast For Water".  Snake charming brass opens "Orphalese" and she goes up more into her upper register. Normally she a more belted blues soaked alto so it is good to hear a wider range of vocal colors from her. The go into more Middle Eastern passages that are very cool on this one.

"Rubedo" finds them going into a more aggressive harder rock feel. Thye jam this one out with some guitar solos that are pretty impressive.  Going into "Pilgrim" they are beginning to make me think they are from Turkey not Italy. Then things get more Sabbath like at the three-minute mark and they do not let up with the doomy metal. It is perhaps hookier in the punches than doom normally is. This song is nine and a half minutes, yet they keep your attention every second of it not letting up. While very adventurous and melodic with a great many tricks up their sleeve I do not think the song "0 =2" is sharply written as the previous songs. It does help me decide this album is more prog than it is doom.

There is more of a tighter classic rock feel to the guitar wizardry that propels "If You Want Her to Be Taken" that finds the vocals having more of a ghostly atmosphere against the creeping guitar to create a Chelsea Wolfe like feel . The song builds dynamically to gain a more metal momentum as it gathers speed. This carries over even further into the punksih blast of "Leffotrak" which really does fit or make sense for the album except to prove they can get as heavy as they want.  "Serving Him" is closer to more of a middle ground for them. The guitar is very nuanced. More rock n roll than the bulk of the album. Atmospherically the riffs simmer to allow the vocals to do their thing. I will give this album a 9.5, it is encouraging that the first album I reviewed this year knocked it out of the park even though this album does not drop until March 11th .