Dance With the Dead ; " Driven to Madness" 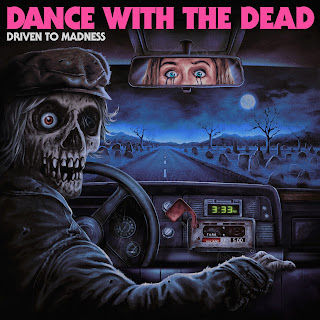 The music I review in January certainly sets the tone for where the year is headed. There were a few albums last year who made it into top 10 lists for the year. This is different as it is a synth wave project that leans heavily onto analog synth sounds to create a version of metal in some form thanks to the more aggressive guitars. Their 6th album finds them with an abundance of 80s sounds. It is more dancey than head banging. They did use some organic instruments on these songs, but I would say this a more electronic effort than not. There is a more party 80s metal tone to "Sledge". By 80s metal I am thinking the more progressive bands from that time.
There is supposed to be a horror them to this album, but nothing feels all that dark and spooky when the major chords to the chorus of "Sledge" feel more triumphant than not. John Carpenter and his song Cody guest on this album but it is nothing that stands out or add all that eerie of a tone to things.  We are back to a neon sounding sonic glaze to the more video game like " Kiss of the Creature" which sound more like a pizza party at the rolling rink than anything to do with monsters.  There are even disco and funk elements to it.  "Wyrm of Doom"  is not doom but packs a little more of a bunch before going off into a more dramatic symphonic syncopation that sounds like something from an anime soundtrack. By "Start the Thaw" the synth grooves begin to sound the same to me. To their credit this has held my attention longer than most instrumental albums would.
The guitar melody to "I'm You Passenger" could have just as well come from a Depeche Mode song. The edm like groove to this makes it more memorable than the other songs that close out the album as there is more of a sonic blur in terms of the range of color in the sounds brough to the table. If not for the strong retro current of the synth the last song could have been a prog metal number. I will round this down to a 9 as it works off a formula that creates a uniform feel, but it is impressive a instrumental album got this many listens out of me.
Posted by Wilcifer at 6:42 AM

Email ThisBlogThis!Share to TwitterShare to FacebookShare to Pinterest
Labels: 9, Dance with the dead, synth wave