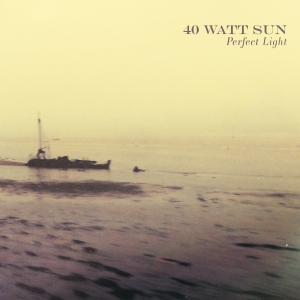 The third studio album from this project is the first that was created without the structure of a formal band. Which is all the explanation you need to understand the more folk direction this on has veered off into from the first song. This is a long way from what happened on "the Inside Room". Hia vocal style has not changed, but the dense distortion that provided a contrast is missing.  This plays into making this album not as dark or depressing which would have been a deal breaker for me, except for the fact it sounds like Pink Floyd and I love Pink Floyd., so I cur Patrick some slack. However Pink Floyd only does this very stripped-down vocals and guitar thing for a song or two, so it is unlikely that if the opening track is the sole indicator of what lies ahead from the album's entirety, then it is not going to fly with me.

There is a little more percussion in the second song to provide movement. This one begins to sound more like an outtake from R.E.M's "Automatic for the People" album. Back when I was smoking a ton of weed and popping pills, I would have been into drifting off to sleep to something like this. Even with a sober mind I can appreciate the melody. It is thoughtful but not dark.  I would not call "Until" rock music, but it has the kind of edge to its longing that I like. There is as low melodic single not guitar solo. This is more of a smolder where rock music has a fire. His voice sounds much better than the more plaintive croon he used on the first two songs. This creates a much richer dynamic. Things are less impressive on "Colours" which is a quaint folk ballad. His tenor voice comes across as reedy here. While it is still on the more balladic side of folk "the Spaces in Between" has more going on sonically.

"Riase Me Up" bringing back some of the longing to his voice. Really just forcing himself to sing in such a stripped-down atmosphere is not doing wonders for his voice as he is not that kind of singer. Sure, he is making it work, but while his phrasing is stronger than his pipes, this is not allowing him to play to his strengths as a song writer. A little bit of distortion creeps in, but the change is marginal. At almost ten minutes there needs to be more to engage me here. "A Thousand Miles" sounds almost just like the previous song. I did not notice I was listening to a new song until I looked up at the screen. The last song is not a hug departure from what we have already heard. I will give this album an 8, if you are looking for some folk that is moodier than your typical granola variety, then this will work. If you are a fan of their earlier work, then you have been warned. It scored as high as it did only because this is what he set out to accomplish and he did that well.