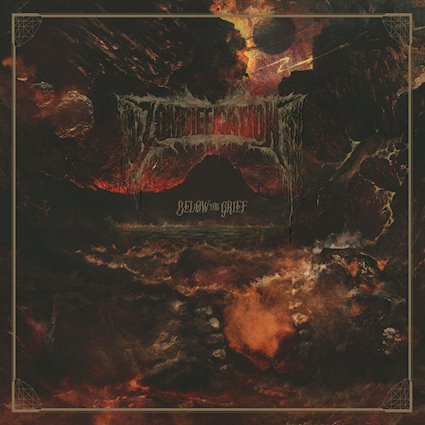 Yeah... I get the Entombed thing going on. But I hear other more traditional thrash elements worked in among the shades of black. The more melo-death Swedish guitar lines are balanced out with meaty chugs. This is the Mexican band's fourth album so one might assume they know what they are doing.  There is more of a gallop to "Deliverance From the Astral Sea". It goes in a weird direction four minutes into it's other wise powerhouse attack to indulge in a trippy bit of ambiance.The craze call of the vocals that are not as gruff or powerful as the roar employed by Entombed , begins to get a little stale by the time we are at "Echoes of Light" . The vocals really begin to pay against the band who would benefit from a lower growl on "From Death To its Son".

The turn to ebbing back into weirdness on "Heavy is the Crown" certainly breaks things up as needed and takes my mind off the redundant vocals. The more mournful riff that wants to be a chorus carries a layered stomp. The things get mushy, aside from a convincing gallop here and there the last two songs sound pretty similar . Though midway into "Sky Burial" things get broken up again with more weirdness which is certainly one of this band's strengths. The chug gets even stronger by the end of this song, though the rule around here is "cool riffs alone do not a good song make". So while it's head bang worthy,there is nothing that goes above and beyond the call of duty.

I'll give this album a 7.5 , the vocals become a sticking point even for all the cool heavy chugs and weird horror movie like excursions into trippiness they take you on which this being my first time giving this band a shot proved to the best surprise. If you are really into the Entombed style of metal but looking for something different then this is recommended. If you are very particular about vocals I can't imagine you liking this.