Looking Back In Anger at Guns N Roses' "Appetite For Destruction" 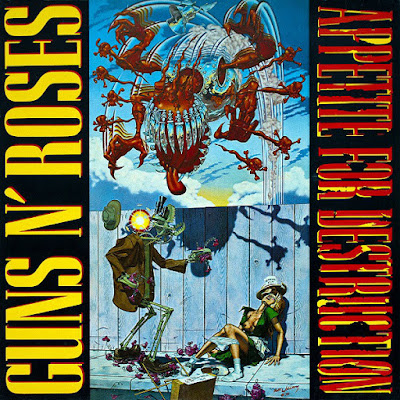 Ok you guys have spoken so I am going to make this column a weekly installment rather than just whenever I feel like it. So I am going to continue to take another listen to albums long regarded as classics and see how they hold up over time. There is a misconception that grunge ...namely Nirvana killed hair metal. This is untrue it was actually Guns N Roses who did this. When I saw them as a kid open up for Motley Crue in 1987 on the "Girls , Girls , Girls" tour it was clear there was something different about these guys ,aside from the fact they were wasted. This album is a testament to that. Sure they had the hair and a sleazy look like Faster Pussycat, but there is something genuine and organic about what they did here. "Welcome to the Jungle" sets the stage from that and while the song served as a calling card to that fact like most of the singles from this album, it's far from the best song. In fact "It's So Easy" is a better song. It finds Axl dropping down into his lower register and the all of his various vocal colors are well displayed in the overdubs. I am listening to the newly remastered deluxe take on this album which is brighter and the separation shows Izzy and Slash's complimentary guitar lines had more going on than met the eye. Sure these guys had the look, but Guns N Roses killed hair metal by sayings, big hair isn't enough you have got to show up and write real songs and be able to play them in a way that rivals our influences.

"Nightrain" is like a pumped up and explosive version of the Rolling Stones, armed with Axl Rose's aggressive screech. I like this songs, but it's not as dark as some of the others and it's groove doesn't slither like my favorites. "Out Ta Get Me" that more of a punk attitude to it. This is really high lighted as they head toward the chorus. Listening back to this I can hear a more metallic attack in how the guitar is picked than what I recalled from when I bought this album back in the day. The drumming is more nuanced than the big arena shaking beats Tommy Lee employed. This attention to detail is what further set these guys apart from the pack. Yeah, it's either the sex or the drug songs that are my favorite on this album. So far after "It's So Easy" this was one of my favorites from the a-side. Axl is once again in lower register.  While "Paradise City" is a radio staple, it's too happy in it's strum for me and I have long regarded it as a fast forward classic. Granted teenage me who would get tired of it mainly listened to metal much harder than this brand of rock, so this was pussy shit to him. Now The verse groove is pretty solid in it's stomp.

The b-side of this album dominated the more radio friendly a-side. There is a darker current to "My Michelle". Lyrically this is some of the album's strongest work. The chorus could have been thought out a little better but it's packs a better punch than "Paradise City" . One of my favorite songs on the album is "Think About You" and if I had to make a mix tape for a girl friend in high school this song along with the oh-so romantic "Rocket Queen" would both be on it. I love how the guitars are layered on the chorus. "Sweet Child O Mine" might be the album's biggest radio hit, and deservedly so as the guitar playing on this was really next level shit for when it came out. The vocal melody flows well against the guitar and if you have to have a power ballad this is the way to do it. It might be one of Slash's best solos, not just on this album , but period. I haven't really harped on his solos a ton so far, but I think at this point in the album you start figuring out that this can can really fucking play. My favorite part is the break down to the lower vocal after the solo to the "where do go now ...".

There is a weird cow punk thing going on with "You're Crazy" , I think this would fit better on any mix tape I gave to a girl post- high school.  This one races along at more of a punk tempo than the rest of the album. The last two songs drip with sex and are the two song I lost my virginity. So it's hard to tell if I just have a sentimental attachment to them. It's also interesting that there are BDSM themes in the lyrics. "Tied up, Tied down , up against the wall, be my rubber maid , baby and we can do it all" . So maybe that is what helped set that in motion. I would not only say "Rocket Queen" is the best song on the album I would say it's in my top 50 songs of all time. Lyrically it pretty much sums up my sex life. I think it was the girl moaning in the break down of this song that this song that made me cum when I first had sex. So at about 7 mins I'm sure I did a little better than most 12 year olds. This album gets a 10. Songs like "Rocket Queen" and "It's So Easy" making up for the album's happier radio moments.