DevilDriver : "Outlaws til the End" 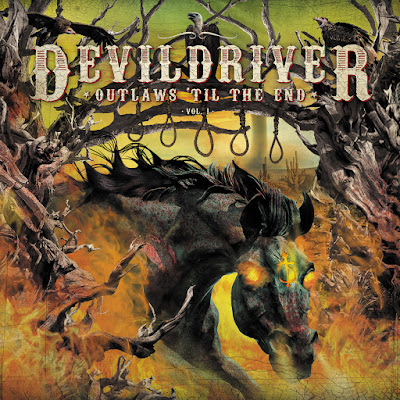 I like classic or outlaw country music. So the idea of a metal band covering a bunch of country songs was very appealing in theory to me. Devildriver is a band I always assumed rooted in nu-metal due to the connection to Coal Chamber, so I never gave them much a chance, though passing listens to what I have heard over the years had yet to really wow me. This makes the first song "Country Heroes" by Hank William the 3rd more impressive, though they have Hank on the track, so how can they really mess that up? They get a little more adventurous by brings Randy Blythe in to help them with Willie Nelson's "Whiskey River" which they do an admirable job with, but I think the Eagles' "Outlaw" man lends itself to metal in a more cohesive fashion. I have never been a huge fan of Johnny Cash , but I do like the song "Ghost Riders in The Sky" . They bring in John Carter Cash to help sing some of his father's parts , as Dez really only handles a gruff bark.

"I'm the Only Hell( Mama Ever Raised" is almost to metal, with not enough country elements peppered in. Ok George Jones is one of my favorite country singers so I am going to listen to "If Drinking Don't Kill Me " with more of a cautious ear. The country elements are not every pronounced they bring Wednesday 13 in to help with this one and his contributions are largely negligible.  I begin to get a little bored by the thrashing version of  Johnny Cash's "the Comes Around" Lee Ving from Fear lends his voice to a few spoken accents. They bring back the more melodic country elements on " A Thousand Miles From Nowhere". It's very clear by the point their drummer is a monster.

The singer from 36 Crazy Fists comes aboard for Steve Earle's "Copperhead Road" . He sounds almost like Blackie Lawless in his delivery.  But the more melodic flourishes are what they needed. It's good to hear Burton C Bell's unmistakable voice on "Dads Gonna Kill Me" , but this is pretty much run of the mill metal. When you take a classic like "A Country Boy Can Survive" then I am going to need hear less chug and more of the real song. This is marginally accomplished. "the Ride" really needed Lee Ving's vocal contribution. Otherwise the essence of the song would have been lost. I'll round this up to an 8, its good for what it is.