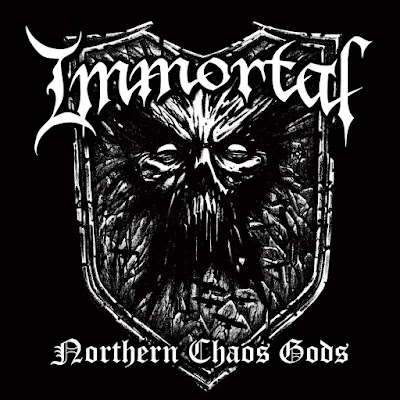 So this is an Immortal album without Abbath. So the problem that hits me from the first song is not that it doesn't charge at you with a lightning fast blitzkrieg of power or that it is not epic enough in scope and sound , but it lacks the trademark croak I think of as Immortal. Instead Demonaz has a higher more screamed rasp. There is a faint hint of a croak. Enough that if you suspend your disbelief and really want this to sound like Immortal it will. It has been 9 years since they have released an album, in that time there is a whole generation of listeners who were still listening to Slipknot in 09 and just got into black metal. They will be impressed. It's kinda like when I first got into Black Sabbath, and "Born Again" had just come out. I bought the album with Ozzy on my mind, I knew this was not Ozzy, but I  wanted to be into Black Sabbath so badly I had to trust Toni Iommi to lead through decades of questionable albums.

This is not bad , just as "Born Again" was not really a bad album. It has all the elements in place musically of what Immortal should sound like. It might be more blasty until the 3rd song than normal, so perhaps that is what is making them sound like everyone. While the more melodic touches do help, I am not sure it's a total cure from what ails them here. That might be more of a chemistry thing. "Grim and Dark" feels a little darker, and Immortal has been more epic than dark in terms of black metal. The undercurrent of blasting on this song, feels like it has more in common with pretenders to their throne like Inquisition. Inquisition is darker than this version of Immortal for sure, but these guys have the edge in the energy of their galloping.

The positive side of this album is the guitars sound massive and fucking mean. This doesn't stop me from beginning to feel bored on "Call to Ice". The snarl of the chorus works, but the magic is not grabbing me like it once did. There is another melodic touch to "Where Mountains Rise" that lends a little more dynamics to the sound in order to make me think this could be played out in the snow. The way the vocals punch in around the guitar reminds me more of death metal phrasing. "Blacker of Worlds" doesn't set them apart from today's younger crop of black metal bands to uphold the legendary status they once deserved . "Mighty Ravedark" finds the band winking at themselves in the best way possible.

I'll give this album an 8.5 based on the merits of the production and how well it's executed. I am not sure this always captures the true spirit of the band and leans more on what is expected of black metal. I think they meet those expectations , but with some compromise.Would I go see them on tour as this line-up? I am not sure, would depend on who they were touring with as support.