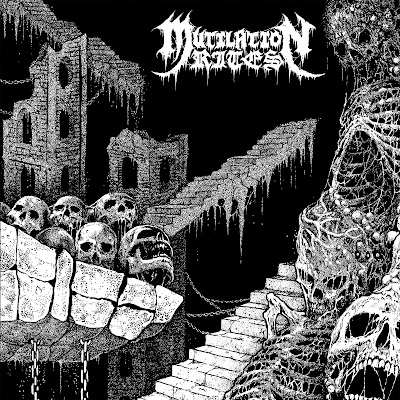 Many of New York's black metal bands come from the hipster circles of Brooklyn. They bring elements of punk, post-rock and avant garde indie rock into the mix. Mutilation Rites separates themselves by only bringing more metal into the equation. The closest to punk is grind core which I can hear more of on the first song "Pierced Larynx". On board this time is new drummer Tyler Coburn, whose double bass in convincingly metal despite his more avant guard past. "Axiom Destroyer" picks up where the previous song left off though it is more straight forward and blasting. The production on this album gives the band a bigger and heavier sound.

"Ominous Rituals" has more groove in its throb than the previous song, but if what is it doing that we have not already heard in black metal before is asked then the answer might leaving you thinking. It does a have passages that are darker and more melodic than anything we have heard on this album so far. The vocals sound like and after thought and for these guys typically are the weakest link. More of a powerful grind drives "Ominous Ritual" which is just what this album needed to break up the blast. It goes in a much more death metal direction. There is a riff lurking in the frenzy the song boils into that reminds me a little of "Dirty Deeds Done Dirt Cheap", it's suffocated beyond recognition. The drummer is killing it, which after the last time I saw them with their old drummer is an accomplishment as they guy was a hairy beast in daisy dukes. The guitars are also well layered here as they are not just doubling each other, but providing a counter point. 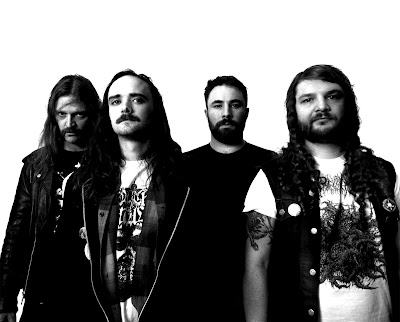 The title track finds them getting a little darker, before blasting off into a rapid rage powered by double bass. It goes from a more thrash drive feel to more of a speedy blur. The vocal spew makes me wonder the merit of the lyrics that become a mute point. It does converge back into a more death metal pounding that reins things in before taking off again which provides the needed dynamics to keep me interested rather than losing me in blasting for the sake of blasting. There is a really cool riff that kicks off "Putrid Decomposition" that closes out the album. At ten minutes this journey has the needed twists and turns so no time is wasted in drone, as every minute is well invested. Angular dissonance possesses many of the riffs here. That is not to say this is not executed with a great deal of power and finds them more on the death metal side of what they do. I'll give this album a 9. Most of the improvements come from the production end, as they might weigh in on more of the death metal side of  their sound, but the identity of the band is firmly intact even with line up changes. Comes out July 20th. />