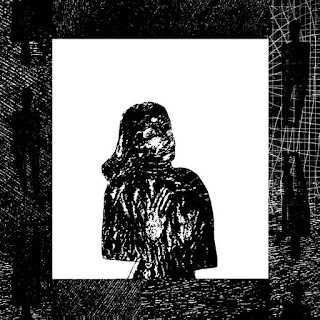 Yes, new post-punk is still coming out. I might not cover as much as I once did hear, because I got tired of rehashing a bunch of Joy Division wannabes. So these guys break the mold to some extent in order for me to take the time and listen to this album . Vocally this is falling closer to Echo and the Bunnymen with the bass line taking on more of a Joy Division like drone. Sure the Cure can always be a reference point for all post-punk that gives it a once more with feeling. The single note guitar melodies that trickle around things also contributes to this comparison to some extent. So this is not the most original thing under the killing moon, so we will see how Rueban Sawyer works with the parts he has assembled here. Gary Numan is also reference point when the synths replace the guitars as the melodic vocal point for the vocals to work around. By the time we get to the stiff drum machine driven "Reasons" despite the cooler Brit pop vocal it begins to sound the same and the album fades slightly into the background. When I tune back into this song it is revealed that the melodies have improved.

"White Smoke" gets more sinew to it's bass line , but it's competing in the mix with the keyboards. The vocals to this song are less interesting as the keyboards begin to dominate things in the Gary Numan manner. "Ladder of Love" has more of an 80s new wave feel, ass it splits the difference between organic instruments and a more plastic electronic sound. I would not cal this dark wave as it's not all that dark and fairly upbeat . I think of this projects two sides I prefer the more Echo and the Bunnymen side as it's darker and more brooding. I think with a full band and better production this project could flourish. All of the weight being placed on the sole talents of Swayer is asking a little too much.  Dark is often my answer to most musical question , but the pulse to "Turn Around" is the exception to that rule as the darker ambiance finds it still droning to a promise it never fulfills. The last song "Covers" sticks to a similar path, perhaps a little more minimalist in the sparse arrangement, that assumes the vocals are interesting enough to carry the song which might be a slight over estimation.

I'll give this album a 7.5 , I think the issues with it have been spelled out pretty well. It's not the most original thing, but I think it comes at some of these post rock staples with a different angle to them claiming most as their own while wearing his influences on his sleeve. It could be darker. It could use a real drummer than might cater to groove less droning. It could do a lot of things, but this album is what is it, not too shabby, will keep an ear out for what the future brings.