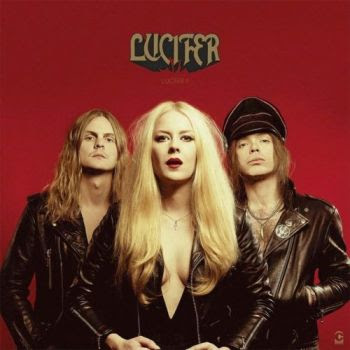 This band picks up where it left off with their thickly inspired homage to Sabbath. Though there is more sultry tone considering the vocals of Johanna Sadonis. Things are more polished on their sophomore effort. "California Son" adds a touch of Deep Purple to their sound before locking into the trade mark Sabbath chug. I'll once again go on record to explain the difference between stoner metal and doom here as that is often confused. The key that makes this stoner metal or rock is the uptempo and lack of a dark or mournful sound. There is a little more of a boogie here. "Dreamer" has a darker mood that reminds me more of Dio era Sabbath, which is a good thing as you don't hear as many bands mining from that era.  "Pheonix" is more like a Pat Benatar take on the genre. It's not as interesting, but it grows on me.

Their cover of "Dancing With Mr. D" makes you think this song was orginally by Sabbath rather than the Stones when you hear their take on it. "Reaper on Your Heels" finds them kinda going through the motions of radio rock from the 70s. The drummer is working hard, but I don't hear the song writing really having it's own personality here. They are still good enough musicians to make the warmed up left overs over to some extent. They look towards a more doomy direction on "Eyes in the Sky", it simmers but never really sizzles. The vocals seem to meander a little more. The fact Johanna's vocals are given room to breathe, certainly helps "Before the Sun". She is certainly hot and this is conveyed in her vocals here. The guitar solos on this album don't really wow me, but the capture the time period aimed for.

"Aton" has more of a Mountain feel. Her vocals work around the riff pretty well and the song has a dynamic flow so it succeeds. "Faux Pharoh" has more drive that propels the song to a more captivating place. The chug is convincing. I'll give this album a 8.5, as they prove themselves good at what they do, they manage to make fresh some of the old retro conventions. The album does hit some redundant murk that generally plagues this kind of Sabbath worship, though her voices helps keep them from being a Sabbath tribute band trying to pass songs off as originals.