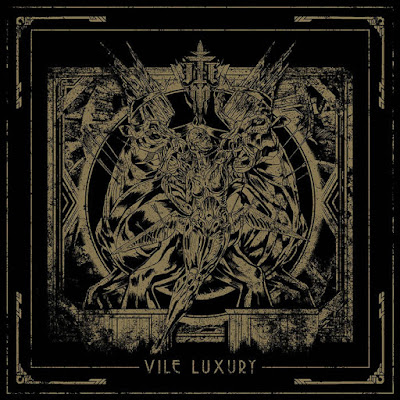 The albums begins with a great deal of literal fanfare, before going into some well done , yet cut and paste black metal that really only catching my ear when the trumpets come back in, so it more Imperial Trumpet than Triumphant.The more angular death metal with touches of jazz found on "Lower World" works better for me. The drums seem to sit back a little far in the mix. Then their is a shifting dissonance to "Gotham Luxe" that moves like brackish water and while I appreciate the dark feel of the song like free form jazz it barely manages to contain this into an actual song. "Chernobyl Blues" starts off simmering and brooding then just kinda falls back into their same old bag of tricks. This becomes the problem with these guys while they do some tricky mathy discordant black metal it all begins to sound the same which is not progressive at all unless it progresses and goes somewhere.

I find myself letting this fade into the background when I return to "Cosmopolis" . The smoky jazz of "Mother Machine" snags my interest again. If this was black metal for  a David Lynch movie I might like this album more. Things do begin to progress on "the Filth". It has a woman wailing away in the background in somewhat operatic singing. This reminds me a little of Igorr when they go about it in this fashion and it finds their zaniness working with them rather than against. They really pull it together in the last three songs as even the one with the woman screaming mindlessly at the end still works.

I think the problem this album starts off with is trying to hard. It's a concept album, though not like say "Operation Mindcrime" but conceptually tries to convey something that might be forced rather than eased into. I''l round this down to a 7.5 for the initial pretentiousness and hope to hear more that is like the last three songs from them.