Birds In Row : "We Already Lost the World" 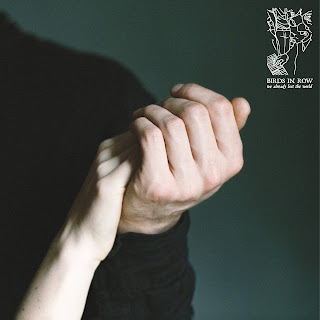 This album is a matured take on what we once called emotional hard-core. I think kids are calling it screamo these days. Call it what you want it comes across much more honest in intention than the emo of the early 2000s . Despite it's melodic set up when the album gets going it explodes with hard core anger and then rages with the desperation of punk after. When it takes off  it has a similar tension to some of Converge's more musical moments of post- hardcore. This is the French band's 2nd album which has been six years in the making. They certainly had time to get the guitar sound dialed in. "Love is Political" has more angular chaos to it , but the bass player holds it together. The vocals are more sung on the thoughtful "We Vs Us" . It maintains a tension that promises more of an emotional release than a hard core break down. I find this to be more unique as I got my fill of break downs in 1999.

"Remember Us Better Than We Are" blast into frantic motion with punk energy. The vocals stay at more of a punk shout. Around the 3 minute mark the song simmers on it's own brooding thoughts. "I Don't Dance" is a temper tantrum until it finds it pounding staccato groove.For some reason this one rages in a manner than works for me better than the previous song. "15 - 38" has a more casual indie rock saunter. Sung vocals come in and add another color as they chant the albums title in the lyrics. "Triste Sire" takes on on a punk rant, that is not my favorite side of what they do and even then it's not half bad. The impressive bass playing and passion they pursue the tempo wins me over. The bass player stays on his winning streak with the rubbery slink of "Morning". It's like a beautifully brewing storm set to music.

The album closes with the anger driven "Fossils". It gets pretty blasty for hard core, before giving way to a more melodic section, sense you can only stay angry for so long until it becomes exhausting. This melodic section is different from the others earlier in the album as it has more of a shoe gaze feel. Overall this album returns to the days when emotion and hardcore fit perfectly together. Sometimes some of the album abrasion is a temper tantrum it has to work through, but enjoyable non the less so I'll give it a 9.