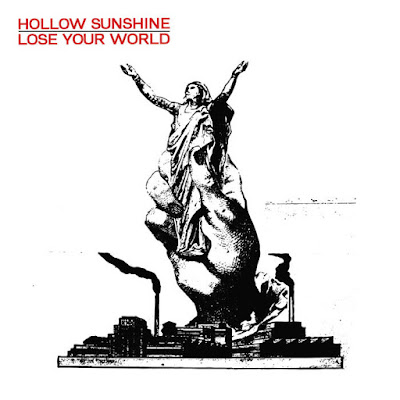 We have been following the project for sometime, while a huge fan of their first release the second did not grip us as strongly. This EP finds them heading more firnly in a shoe gazing direction. It works of drone more than dynamics. The groove seemed to have a similar tension in the riff as "Stranglehold" though perhaps if it was covered by Stone Roses. "Awake and Dry" finds the vocals claiming a more substantial melody why the music simmers in a surreal murk beneath them. Still rather than going somewhere it lingers on this droning pulse with guitars toying around it.

The guitars gain a moderate amount of heft on "Heavens Sings the Soul to Sleep".  The vocals are little higher and over the dreamy wall of dense sonics sound almost like Jane's Addiction. The guitars are way noisier than Janes, and there is none of the hooky punch Perry and the boys once carried. Also the bass feels pretty buried the My Bloody Valentine like hypnosis they are trying to induce here. This song does kind of have a little more of a build than most of the others on the EP, though it introduces layers and there is never a tempo shift of any kind.

"Thank You" is not a cover of the Led Zeppelin. It's dreamy drone that reminds me a little of Jesu if their shit had been moree stripped down and basic. It's pretty much just guitar and vocals . The drums come in at the end the Led Zeppelin feel occurs in more of a "When the Levee Breaks" kinda of way. Even then the drums are no as powerful as Bonham, but who does play like that anymore? Ok I guess Clutch. But rock music is not what these guys are ultimately trying to craft here, it is something much more surreal . I'll give this album an 8, the vocals are really improved which adds to the overall sound. It is a little droning for my tastes but I think they suceeded in making the album they set out to.