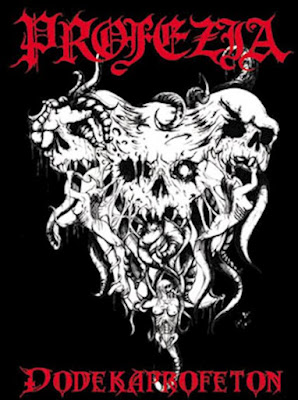 When it comes to black metal this blog's quest going forward is to seek out the best black metal that is not just blast beats. The third album by this Italian band seeks to pull from first wave black metal influences while having the sweeping sense of majesty that marks much of today's black metal. This band features members of Abhor and Make a Change Kill Yourself..., so the touches of gothic horror as well as depressive elements are both present. The vocals are not that emotive as they stay at more or less a croak. There are grandiose hints of classic metal on "Nahum". The drummer has his double bass dialed in for sure.The keyboard and violin find their way back in  early on in this 12 minute monster. The violin makes me think of My Dying Bride.

They do give into the blast beats going into "Amos" . Midway into the song it breaks into something more like chamber music giving it a more folk vibe. Then they speed back up. I wasn't paying attention when it transitioned into "Obadiah". This song has a more deliberate pulse. Things get darker and creepier going into "Jonah".  I like the mood being created here and become curious if this is going to become an actual song. Two minutes in and I am beginning to doubt it will and my fears are confirmed. There is an interesting throb driving "Zechariah". The drums shift under neath the some one static melody of the guitars.

"Zephaniah" is almost 18 minutes long. It takes two minutes for the song to kick in. The vocals are more of a death metal gurgle here. To be such a long song I think it requires a greater expanse to sonic colors to justify the indulgence of it's length. Instead it drones in a meandering manner. The drummer tries his best to steer it with greater intensity, but the guitars are locked in what they do. I'll round this down to an 8, there are some songs that really work best for what they do and then other moments not as inspired. None of these are bad songs. If you are really into this brand of horror movie like occult metal then you will also dig this album.