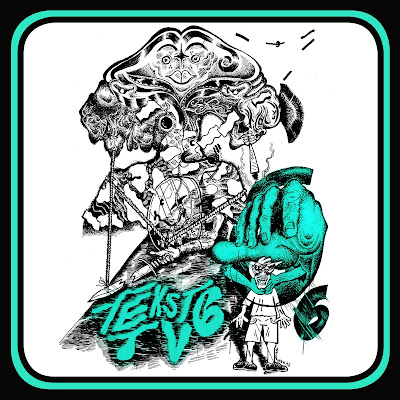 This odd band from Finland is not just jumping on the shoe gaze band wagon they are giving the wheels a spin of their own. Where most shoe gaze tends to be slow and dreamy these guys are pretty up temp and let the guitars get spacey in the back ground as the bass and drums drive the ship. The vocals are also delivered with more of a post-punk energy rather than the more sedate breathy kind that are the norm.The kind of pop punk injection of the second gives them more of a Cure feel. My initial thought is it's a little happy. The melody has a very 80s feel.It's not until the thrid song to they finds them selves in the kind of droning groove that is set against the more typical trappings of shoe gaze that you feel like you are in more familiar territory. The guitar feels a little more like Sonic Youth in how it lays down the ground work for the vocals .

They continue band the road that's more traveled on "Severny". This has more of a Stone Roses feel. Though the first few chords hold more weight than Brit Pop and have a more My Bloody Valentine like ebbing down when the vocals come in. There is a more Led Zeppelin like pulse to the song that follows this one. It also dies down into more dreamy drift, but it does prove in the transition that their drummer has some chops. The bass leads back in with a slinky groove that the effected guitars play around. I think this song would transition well live. It swells into something more dense and sonically intense. The last song finds them racing off into a more upbeat take on 90s indie rock mixed with 80s new wave pop in the melody lost in a boozy swirl of shoe gaze guitars. +

They take enough familiar elements and polish them up before adding their own weird spin. I think this album is a more unique take on modern shoe- gaze than simply re-booting as a tribute band to Slow Dive . I'll give this one a 9 as it stays interesting, at times it can be rough around the edges and noisy, but the charm of these songs smooths even those moments over to make this a fun listen from start to finish.