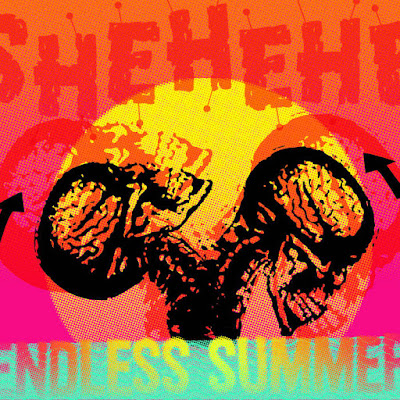 I say I am going to review lots of albums and while I mean that when I say it, the truth is , there are not enough hours in the day and something I am already a fan off comes along and distracts me from the intended album. So I am going to do this one in 24 hours like I told myself I would. This is a punk band from Athens, Ga. There are many of the familiar punk trappings like the rapid pop of the snare and reckless guitar playing.Athens is not the first place I think of punk coming from , but they sound pretty authentic. Frantic might be a word more suited to describe the feel of this than calling it aggressive. It's more happy in it's driving energetic style. Some times the vocals form almost an ominous chant. There are over dubbed layers of the yelled female vocals. I really like the lyrics to "Halloween Hell" where they declare the hideaway hookers all wanna dress like sluts. This is a really fun song I can sign off on.

There is more of a bounce to "Riot Surfer". This style of punk is typically happier than what I normally listen to when it comes to punk, which regular readers here no leans more in the direction of  Joy Division. These guys are fun and hooky which goes a long way no matter the genre. The vocals frequently crack in unison screams.More pounding than the Ramones and holding a much angrier edge than the more garage rock strains of punk like the Coathangers. They throw a party on "John Lee" ,there is a little more of  a hard rock edge to the guitars here, so these guys could easily play with bands from other genres and not feel out of place. More of a 70s Runaways feel creeps into their shifting sound on "Dirty Life". What I am beginning to like midway into this album is how they can shift their sound while retaining their identity.

The album title doesn't lie as many of these songs sound like summer anthems and feel like this band should be from California rather than Athens. "Costa Rica Dreaming" falls into this category. The bass player throws in some subtle flourishes rather than always following the guitar line. The other winning quality that sells this for me is the attention to detail in the song writing department. They are not a 1,2,3,...go! punk band that recklessly blasts through chords to call it a song.  "Sorry You Love Me" doesn't grip me as urgently as some of the other songs, but it still accomplishes what they set out to do. "Wet Christmas" is like a punk take on "White Christmas" following a variation of the classic arrangement while declaring that they want to be moist all day. Sounds like a decent holiday to me. "JMA" finds the drummer showing their chops as the band begins to play of a more typical punk tempo.
A more rowdy sing a long can be found on "San Diego Pizza" that makes me think this band might be a lot of fun live, as they aren't throwing their brand of political anarchy in your face or raging against any machines, but just trying to inspire more drinking. Granted I quit drinking, so I might not need a soundtrack for that I still appreciate what is being done here. While the vocals are never a shouted after thought on "Romona Ray" they receive the kind of spot light that is often reserved more for pop music which makes this song stand out more and is my favorite on the album. I'll give this one an 8.5, which is really good for an unsigned band who plays a style of punk that is more sunshine than the shadows I prefer, so if you are not a depressive like me and enjoy some feel good music you might round this up to a 9.