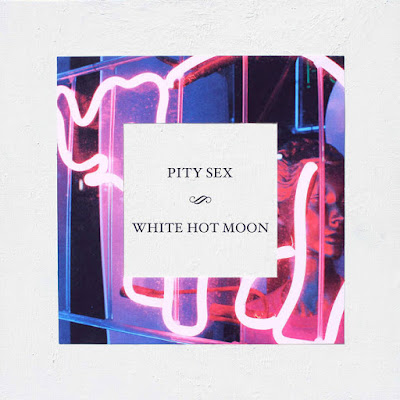 When it comes to indie rock record labels Run For Cover, has the cream of the crop. They tend to go for more morose artists and this band falls in with the pack. The lyric from this album "nothing matters in a dream" from the opener off this Ann Arbor band's new album is a perfect description of their attitude going into this. The monotone vocals are pretty apathetic and sometimes offset by more sugary female vocals that coo under the fuzzed out drone of the guitars. Their cleaner guitar tone works better for me than the super over driven one. The guitar punches and vocal phrasing is tighter on "Burden You". There is a surreal dreamy feel to their music , but I am not sure they should be described as shoe-gaze. "Bonhomie" gets pretty up-beat, almost to the point of being too happy for me with the chorus' hook the only thing to keep it in play. They are more reflective in "September". I like how the male vocals are mixed differently than the female vocals and sit back in the mix as more of a call and response. Sure the bass line is kinda lazy and could carry the song more than it is, but the vocal interplay really sells this one. "What Might Soothe You" kind breezes by me with nothing really reaching out to grab me and "Plum " strummed with almost a similar indifference even though the two songs don't really sound the same. Its the layered harmony vocals of their female singer than save this one.

There slacker apathy is infectious as it's easy for me not to really care enough. I had to step away from the album to return to this album with fresh ears as I found myself not caring about it as much as I did when their sound was new to me on the first few songs. They lay the Sonic Youth on thickly to the beat of "Orange and Red". The only hint of shoe gaze I pick up here is the vocal line to this song, but it's pretty upbeat. The lazy strum of "Dandelion" floats the song off into a care free lethargy. The male singer's voice comes in on the title track to spread a blanket of indifference. There is more love and care put into "Pin a Star ". It ambles along with feathers in it's footsteps. "Wappen Beggars" has more heft in the over drive and the bass steps up in the mix , but in many ways the song feels like a more distorted version of the previous song, how ever the vocal performance  by the male singer steps up it's game and it's his best showing on this album. Ambivalent indie rock is not our forte here, though we do like Sonic Youth and many of their bastard spawn. We like indie rock if it's depressing enough and the guitar tone or some other factors draw us in . This album was mildly entertaining and has it's moments, more positive ones than not, though I don't really see this as something I would listen to more than the two spins I gave it, but it might be your thing if you are looking for something that doesn't rock to hard and are too young to have gotten into Sonic Youth and Hum, so I'll give it a 7.