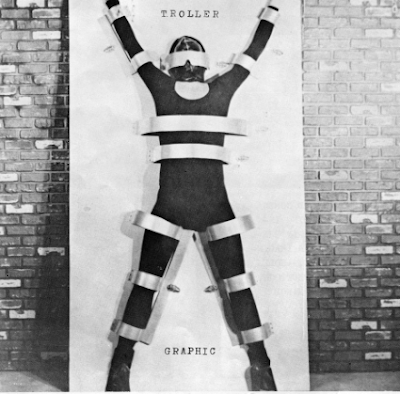 This is the Austin based projects second album. The go for a cold cave like club sound that recalls the 80s. With their singer's moaning croons lurking under the drone of the synths, the lo-fi pop of the minimally programmed drums sounds more like the crack of a whip. Unlike most dark wave band's their goal is not to get you out on the dance floor but to wallow in your own narcotic induced misery. On first listen the effect is similar to that of hearing a really heavy metal band for the first time. You are bowled over by the sonic weight that hits you, so it's not until the second song that you can ask"So can these guys really write songs?". The slow groove and thick atmosphere of "Not Here" provides enough of a smoke screen that the answer to this question is easily found. The singer's melodies seem to have more purpose and their is a bass line punching every thing forward even in the murky swirl.

My wife was not really impressed when I was listening to the album this morning and said it sounded like they are just jamming and making music for people who are high. She went on to state that it reminds her of when you fall asleep watching a movie and the credits wake you up. Unlike the more traditional dark wave this album is very raw. The atmosphere creates a thick drone in some places. The ballad "Storm Maker" is more of a misty drift that could play in the back ground of David Lynch movie. Perhaps not as haunting as Julie Cruise, but in the same school free drug zone. The album is riddled with synth interludes. One of the darker and more compelling moments that emerges from the haze is "Nothing".  There is a more defined beat behind "Sundowner" that helps rein in some of their more kraut rock tendencies. The album comes to close with a swathe of ethereal noise that tries to congeal into a song.

There is some interesting sonic exploration going on here and the album is certainly dark enough to suit my needs, I agree with my wife's criticism in the sense the album could use a firmer hand when in comes to writing song. Many of these drift around like ghosts outside of a dance club rather than being corporeal enough to move people to motion, not that dark wave has to make you dance in order to be effective. I think this needs to be more grounded in song even in the haze of it's gloomy heavens. I'll give it a 6.
Posted by Wilcifer at 7:38 AM