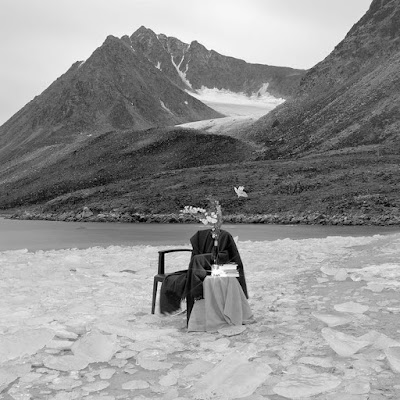 This review is short and sweet much like this album. Though it's level of sweetness will be called into question. I like Entombed so I am ok with d-beat. The first song proves that it is an effective style of metal, the second shows when it is not as effective and comes across more like metallic hard core. Going into 'the After Math" they employ more musicality in the tribal drone of the songs static build that leads you on for six minutes with nothing happening. They take on a little more of a black metal snarl for "the Solipsist". Dead Air at the Pulpit called these guys a heavier take on Deafheaven and I don't really hear it as they are much more one dimensional. There is a little more of a sonic touch than want your average black metal band employs and a little bit of melody begins to creep into the work with the solo at the three minute mark. But I am not convinced these guys are a black metal band as they only have some of the ingredients tossed into a few songs. This argument could also be made against Deafheaven and I say they were with "Roads to Judah" and the new album has it's moments but they are not black metal in the truest sense either if you want to really split hairs.

This albums has a few choice moments mainly the first song and the last so I'll round this one down to a 6.5. It's more hype than not and has all the qualities hip metal heads who want to stir things up want, making the hip stirrers. These guys are from Indonesia. Though this could bee another Ghost Bath in that regard. They have more hard core roots than metal. The product is more raw than polished. They can play their instruments but don't allow for pretense or pageantry. The album is only 15 minutes and really on 3 actual songs. If this is on any one's end of the year list , question the rest of the entries as well. So maybe that is what they have in common with Deafheaven they make you question do you really like black metal or just the idea of black metal?