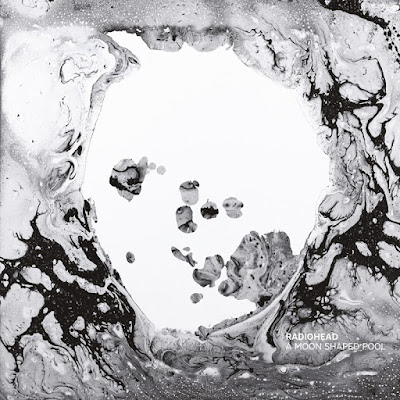 The rule of thumb for Radiohead after "OK Computer" has been when the bar is high, then it's time to get weird. Expect more electronic than anything coming close to "the Bends".  Piano paves the way for ethereal trickle of "Daydreaming", which going for a ballad on the second song is dialing it way back. Sure Thom Yorke has a great voice. He is still able to sing in a fragile tenor that borders his head voice in order to convey an emotional vulnerability that makes him one of music most unique voices. Not sure any one else aside from maybe Robert Smith or David Bowie could have really pulled this song off. There is another minimal atmospheric drift anchored only by the vocals on "Decks Dark". It is the first song where I begin to hear hints of guitar. The guitar picks up the groove and makes a very subtle entrance. Acoustic Guitar starts off "Desert Island Disk" has has an almost Led Zeppelin like feel to it. Don't hold your breath waiting to rock out. Like the bulk of their catalogue this would sound great on chemicals and it's hard to imagine them writing "Ful Stop' without being high. It does build up nicely, but weird wise it's on the dark side of the spoon.


The lines between Radiohead and Sigur Rios, become more blurred by the time you get into "Glass Eyes" and it's really Yorke's voice that makes that distinction. The bulk of the album's weight really rests on Yorke's voice which is what sells" Indentikit". Guitar finally finds it's way into the song , but the show has already been stolen by the crystal pipes of Mr. Yorke. The songs are all fairly to the point with the five and a half minute "the Numbers" being one of the album's more ambitious moments and another point where the ghosts of classic rock past come to haunt them. It's like ghostly gospel in some places. "Present Tense" doesn't find them breaking any new ground, but doing a variation of what they have given us on previous albums. It continues to be well done and is hard to arguing against if this is their version of re-hashing. There is a slight country feel to it. By country it's been shot past the milky way and landed in a crop circle out side of Nashville.

There is less holding "Tinker Tailor Soldier Sailor..." together. When people say they don't like Rush because of Geddy Lee, I can understand. When some one says they don't like Thom Yorke this song and the one that follows "True Love Waits" are good arguments against him, though his voice is also the glue that holds the best of these songs together. This album is not as good as "In Rainbows", and Radiohead fans will try to convince themselves tis is even though it is closer to the being the band's "the Final Cut". Every Radiohead album should be a 10, but this one is sadly only a 7.5, as high as some bands can aspire to climb, but this is a band who made perfect albums and is now dialing in these lullabies, so perhaps the band took down all their social network sites so the backlash of snoring to come would not be felt by this snooze fest.