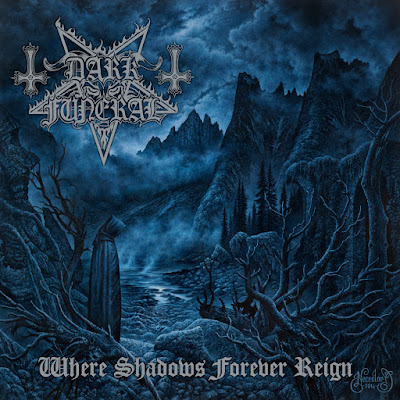 Despite the fact Justin Bieber was Tweeting about these guys, or so the new age of urban legend of the inner webs would have you believe, these guys have not made themselves any more accessible and combine old school blasting with some melodic playing that reminds me a little of Gorgoroth. The vocals of their new singer have more of a thrash like snarl to them than anguished screaming. I have often though of these guys as more blackened death metal in the past, and that is still a valid sub-genre to toss around here. Guitarist Lord Ahriman is the only original member left standing. Midway into the second song they hit some of the faster blasting thanks to drummer Dominator, who lives up to his name. They flip back and forth between styles with "Beast Above Man" feeling much more death metal until the hit the blasts that kick into the verse. Once we are midway into this song however, it fails to over power me and becomes more of a blur.

Fortunatly they do slow down so "As I Ascend" can make some sense and have a more musical quality to it. Here their new singer show more personality. The is a very dark slithering throb to "the  Temple of Ahriman" . The mid paced throb that is more black metal continues on "the Eternal Eclipse".  One thing that stands out about the new singer is how articulate he is. The lyrics really stand out. While this is not a quality that I have to have in singer's as I sometimes prefer hearing the voice used more as an instrument, on this album it is one of it's best qualities as so many black metal bands let the lyrics get lost in the screaming. The more death metal pulse is felt in "To Carve Another Wound", the vocal pattern reminds me a little of Cradle of Filth, but with out Dani Filth's annoying shrieking.

They are both dark and angry enough for me on the Slayer like "Nail Them to the Cross" which goes on the tracks into outrageous blasting. It is pretty fucking heavy, but just doesn't feel like it is as well written as the other songs. The death metal growled chorus is pretty cool, but over all it is not as solid. The title track that closes the album, opens with crazy blasting, and claws in every direction like a wild animal snapping its jaws at you.I'll give this one an 8, because it's crazy fast and heavy which is what you want from these guys and it is often way better than I thought it would be the last too songs find the need for speed overwhelming them, but otherwise it's a pretty solid album.