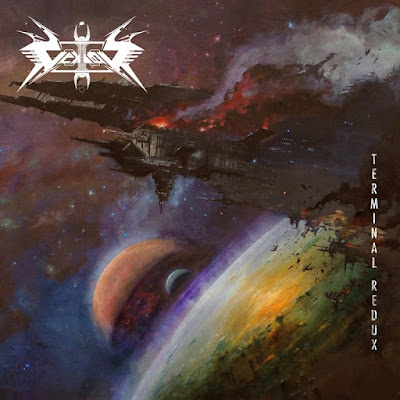 Vektor has matured on their new album which contains more thoughtful lapses into layered sonic excursions and melody rather than the more manic thrash found on their first two albums.The band finds more common ground with Voivod than just ripping off their logo on this one. While they don't have that more post-punk dissonance the Canadian band has, these kids from Arizona do show a much more progressive side here. The growth is not without compromise. Some of that compromise comes in the form of the feral fury that previously made the band a heavier brand of thrash than what is happening on "Cygnus Terminal". It's not forgotten and comes roaring back on "LCD" which will make fans of their previous work breathe easier as it takes a step back in thrash more focused on the circle pit."Ultimate Artificer" brings the speed back after an interlude.They come closer to recapturing what thrash bands in the 80s had that their second generation spawn doesn't and that is hooky songs, with vocals that fit with the riffs. They get into some almost black metal blasting to solo over along the way, but it's far from even "Calling in the Coroner".

I can hear the Slayer influence in places on "Pteropticon". It's not their energy that makes this band their most effective and I think they have a hard time understanding this when caught up in the momentum. The more deliberate chug of "Psychotopia" works much better.Sure there are some cool pit inducing riffs that crop up, but the rule here is cool riffs alone don't make a good song. The vocals stay in a higher rasp some times going into more of a shriek that creates an effect similar to hitting a metal yodel, they are just unable to do this as a note. The acoustic tone leading into "Pillar of Sand" gives a little more dynamic range before taking off into the hyper speed. There is a little more of a hook on this one. "Collapse" finds them actually singing in order to create their "Fade to Black" power ballad. Vocally there is more in common with Pink Floyd than Metallica. When they begin to pick up the pace it is done very smoothly and makes this the best song on the album.

They get back to a variation of their old bag of tricks on the closing rage of "Recharging the Void". They build up into an almost blackened blast on this one. There is a return to clean on this one as well, along with a "Great Gig in the Sky" like female vocal sitting behind it. Once again the clean vocals have a Pink Floyd feel to them.I'll give this one an 8.5, see how it grows on me, if you are a fan of the band go ahead and round it up to a 9 as I have no attachments to them either way, but there is no denying a ton of growth has occurred and placed them a step ahead of bands who just want to recapture the glory of 80s thrash.