Obsequiae: "Suspended in the Brume of Eos" 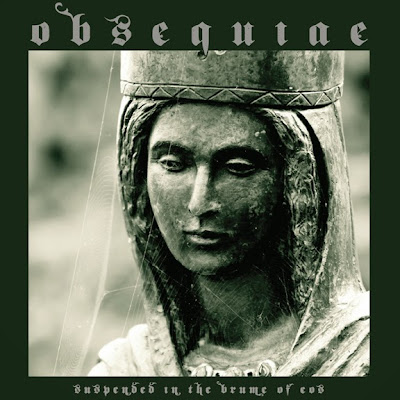 This is folk metal done without the larp like cheese added.You do not need to play Dungeons and Dragons to like this, though this would provide a pretty rocking sound track to a game if you were playing it. The opener "Altars of Moss" set you up for the frosty landscape that is not unlike many of the snow covered plains that Moonsorrow navigates their thematic riffing over. The emphasis seems to be placed on guitar melodies rather than beating you in the ears with heaviness, this strength will be seen as an annoyance to those who are not fans of this sort of thing, but if you are these guys are worth giving a listen

The vocals are anguished enough to be convincing black metal on "Wounded Fox", but the more epic folk metal swing behind it cavorts with the guitar harmonies in a way that is devoid of the dissonance attributed to black metal though the momentumof  "In the White Fields" comes closer to a place where black metal might meet a band like Tyr.

Agalloch comparisons could be made at times, they certainly have somewhat similar standards for composition and dynamics , though Agalloch's leanings toward clean vocals make them more keen songwriters ,where the screamed vocals here seem more like a coating applied like an after thought with the emphasis placed on the riffs.

Some of the more Arthurian intervals they return to cause some of the guitar parts to sound similar, the title track takes on a heavier chug at times to help set it apart."Atonement' goes into the medieval waltz with more meat on it's bones than the frolic laced guitar lines of some of the other songs. They are out to shred on the frantic pacing of "Arrows". "Starlit Shore" launches into a similar pace before returning the regal gallop the band is most comfortable with they speed up to hyper pace like some Dragon Force might do, but with more sincerity and black metal leanings.

There are quite a few cool punches and rhythmic nuances sprinkled about the closing intrumental, that would have been cool to have been used with more frequency in the album as whole, but at least you get a parting taste of them here. I am not a fan of instrumental so it's a credit to their playing they were able to hold my interest here.

.The emphasis seems to be placed on guitar melodies rather than beating you in the ears with heaviness, this strength will be seen as an annoyance to those who are not fans of this sort of thing, but if you are these guys are worth giving a listen  I will give this a 9 as for what it is, which might be too happy for my taste at times is masterully crafted viking/folk infused metal, that gets it right with out tripping over their chainmail and there is not enough of that in the world of metal.