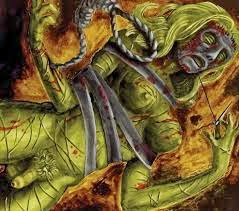 Faster than sludge should be , but not quiet black metal by the standards of most, though this album moves the band closer to the blackness. I really liked "Pervertor" it hung tough in my iPod for some time, because not many other bands summoned up the mean streak these guys have.With that said it raises the bar on what I expected from this album and so far it seems to deliver, though is requiring a few listens to solidify my opinion.

There is little debate on the opening track which comes in with the sonic vomit similar to Neurosis on Through Sliver and Blood , but more like if they had rabies when they recorded it. Metal bands do have that advantage where the first song they can really slam you in the face by the intensity and there is no way not to like it then the challenge becomes how to make every song that awesome without being one dimensional. The title attempts to show how it's done, but even then in the immortal words of Spinal Tap, when  you are at 10 where else is there to go from there?

The blurred frenzy that ensues sounds like a collision of Today is the Day with Eyehategod. The vocals are wretched and scathing, just like on the first album, the main change seems to be the need for speed as this albums gets much more blasty. Not unlike the Great Old Ones I just reviewed , these guys have gotten heavier on this one, here it is much more of a feat and makes them less accessible , where it had the opposite effect on the French band.

There is almost an industrial feel to the chant that opens "Possession Prayer" This once stomps with machine like deliberation and I like the fact it sounds little like the two previous songs providing  more depth to their sound. "Negative Birth" lumbers in at an even more sludge like pace, almost bordering on doom. It's pretty fucking apocalyptic, though the most like Neurosis in its lumber. When the need for speed kicks in picking up the pace doesn't add a lot to the song.In fact it makes the band sound like every other death metal band just without the guttural vocal and a more screamed approach. By the end of the song it hits the point of being white noise.

"Coil" has a darker slink to it that I like. The vocals start with a weird robotic effect on them. Its cool, but kinds stays on the same thing and feels more like an interlude than a fully developed song. Though this is made up for in the 10 minute "Three Crosses". When its a ten minute song you better believe they are going to take their time launching into it/ The intro is the most black metal section on the album. At around the minute mark the vocals come in to herald the song is under way, though it lingers with a pounding rumble. The guitars actually achieve some melody on this one even if it is a fleeting refrain. The song can not resist their new found urge to fly off into blasting , but established enough element to where when this happens it's alright.

I will give this one a 9.5 and see it it can stand the test of time, the more blackened approach seems to be balanced out with the sound we know they are good at and makes this a good listen in the days where new heavy music is slimmer picking.