Report To the Dance Floor : Lael Summer's "Burden to Bear" 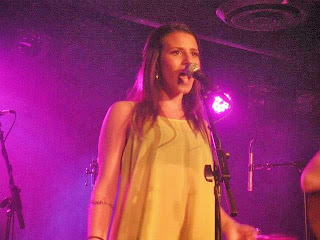 Before house music there was disco, which took funk and soul and kept it up all night long snorting coke and rolled up in polyester. If you think disco isn't my thing, know that I'm a sucker for female vocalists, so I took notice when  my friends over at True Groove out of New York brought this  young singer Lael Summer whose influences are clearly dipped in the soul classics of the 70's. Sure, there is a disco queen feel at times , but Lashe is not too divalicious. This is not all peppy pop as She does have a mean streak like the line 'we both know/ that I've got twice the balls that you do."

"Too Much" groove into an almost Alicia Bridges feel..you know "I love the Night Life"   These are real instruments played by real musicians, so they fact that these beats are not a by product of a computer program might be a turn off, but even if you like Bowie's Young Americans album, you will find some common ground, as the sax lines are very Bowie to me.

The obligatory piano ballad comes on "Make You Whole". It is well sung, and leave no doubt in your mind that she has some pipes on her. The grooves come back on "It's About Soul". To her credit Lael has hooked up with the right posse to achieve the sound she is going for. The sass of the melody could be something Christina Aguilera might have done at one time, but with a more organic and authentic sound to it. She dips back down and gives you a breather on the more Norah Jones flavored "In Time".

This album sounds great, it recreates the warmth of the era it takes the most from without being a total backward glance into retro nostalgia. The more Diana Ross flair rears up again on "Kiss and Tell" , it also reminds me of Olivia Newton John...post-grease of course.

The more Sade classic torch song meets soul comes in the powerful cover of  Hall and Oates "Do What You Want" ends up with the sultry punch of "Is It a Crime", which is a pretty high compliment as I place Sade in my top ten female vocalists of all time. Her knack at vocal over dubs help establish her identity here. Her upper range that she projects from her chest voice is pretty impressive as well.

The disco funk heats up on " What Do I Know (about love)" , the chorus isn't as strong as the verses here, but they create such a tension until it doesn't have to have a big build to be dynamic and is really capturing more of a sixties feel. There is fittingly a more of New York groove to "Look Around" that brings to mind the days when G.e Smith was leading the Saturday Night Live Band . Tomas sets his blues influence on the back burner for the majority of the album letting it surface on "Unconditionally". It's less dancy than the more disco like numbers, but she is backed by such competent players the music alone keeps you grooving.

There is a more Alicia Keyes element to the closing ballad "The Good Fight" which seems to have a 12 step element to the lyrics, but hey it takes one to know one.The guitar solos add the best colors to this song and her harmonies help the dynamics bring this song up to the level of the others when some of the cumbersome lyrics seem like they would weight the her phrasing down, but she pulls through and the song ends up with a more 80's feel to it  but with an almost Broad way bravado.
Posted by Wilcifer at 10:46 AM

Email ThisBlogThis!Share to TwitterShare to FacebookShare to Pinterest
Labels: Report To the Dance Floor : Lael Summer's "Burden to Bear"