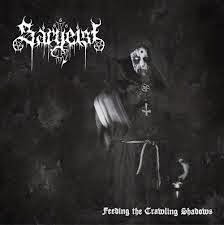 The raw black metal band out of Finland is comprised of members from Horna and Behexen. The production is lo-fi and cvlt enough for anyone, if it was many more under produced the guitars would sound like static. There are elements to this I like like as the dark vibes coming off of this. It adheres to the metal rule of the intensity of the first track smacking you makes it hard not to like the first track then the challenge is to keep my interest once that wears off. The approach here is what you would expect from raw black metal, blasting and a few gallops here and there.

"In Charnel Darkness" doesn't veer too much of course from where the first song went, though there is a slightly rowdier element to their charge forward. They are not re-inventing the wheel, just making it spin faster. No new tricks are being introduced to this style of black metal, though it does sounds to be a little more feral and triumphant than what I have heard of their previous work. The singer does go into a lower death metal type rasp at times that has some power to it and seems to vary the tone of the song.

Some of the tremolo picking is cool on "Unto the Undead" , but the guitar tone is so tinny, it doesn't bring out the qualities.The vocals are mixed back into the cacophony on this one. Its not until the pace slows in the breakdown of the songs final act that it is able to establish an identity.There is more of the same from "Snares of Impurity" though the approach to the vocals here reminds me more of Mayhem. By this point its all starting to sound the same to me so I find myself forcing my ears through the album.

I love black metal so I want to like this. The blistering fuzz of what is passing for guitar here makes that difficult and " Return of the Rats" is running down the same hill these guys tend to stumble down.Things are more blurred due to the rapid blasties of this one. The half time march these guys gallop into is the only real dynamic element in this one, otherwise it's one dimensional.

There is a little more of a sonic drone to the white noise of " the Unspoken Ones' the speed becomes a mute point , as when every thing is a blast it doesn't seem like it's as intense as it numbs you. The vocal accents are the only thing that lets you know you are where the chorus should be and then the stompy march begins. "Shunned Angel' picks up where the previous song left off , though the vocals are  little more frantic here. The death metal vocals appear sooner here than they do in previous songs, the alternation between the two is back in effect.The lyrics are almost decipherable on this one as well.

Its about time all the songs didn't star the same so "Inside the Demon's" maze does it's job.This is my favorite song on the album even when it accelerates back into the blast they have been at all along. The riff somewhat modulates around the gallop. At four minutes long all of these songs tend to drag despite being so fast.The vocals take a little more of as variance in their phrasing on " Kingdom Below" , but once the momentum blisters this one away you are lost in its storm. Midway into this one there is a somewhat Watain like riff , thats is pretty cool.

When I think "Funerary Descent" it's not as fast as this song. But I don't hear them slipping into doom anytime soon. This one is another blur of guitar, that over powers the drums here. The accents on the end of this one are pretty cool and the riff they chug out on works better than most of this album. I'll give this a 5.5 as most of it sounds the same if you are a fan feel free to round it up a point and take some time to contemplate why you like it when all the songs sound the same and is it a reflection on your lack of depth and layers as a person.