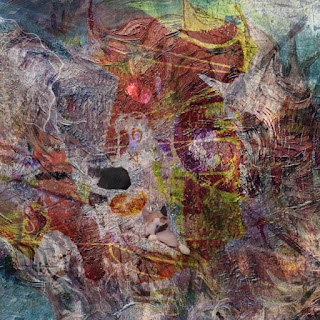 These guys start of weird and wonderful then when they kick things up into more of your standard screamo madness begin to shed the wonderment created by the opener. When they break things down into bite sized minute long sound explosions they prove to be not as capable with this as some one like Portrayal of Guilt , who makes the most of any time they give themselves to work with. This results in a song like "Combat Wombat" being more noise than not. When they race along the more methed out screamo thing they also lose any sense of dynamics they offered in the first song.

They give themselves more time with the almost six minute "Semi-burnt Sugar" , this is much more listenable , not as good as the first song where the novelty of their sound won me over but better than the other songs as the guitar is allowed to offer some form of melodic embellishment. I get what the spastic freak out of grindcore is about , I like few bands who do it , much better than what happens on the song "I Quit" . It makes me wish they had quit with this one and used the studio time more wisely with this minute,. "Kneading Neatly..." offers a little more thought, with a cool riff midway in, though the rule around here is cool riffs alone does not a good song make

I feel they cared a little more about the songwriting on the last song. Normally I say when you put the sound before the song writing it suffers. I think this is a young band that is working on ironing both sides of the equation out, though the tinny guitar sound could be more about the production and mix of the album. The guitars could use a more organic tone for sure, when everything thing is compressed down denser into the heavier sections it does not have the kick a band like Nails does. I like where they take the last song and think, with more love given to songwriting and in the studio these guys are off to a good start and could be onto something.   The more Deafheaven shimmer toward the end of the last song is a glimpse of what the future could hold for these guys . I will give these guys a 7.5 , if bands like Infant Island or any other of the artists I have name dropped here are your thing then these guys are worth checking out.