Eyehategod : a History of Nomadic Behavior" 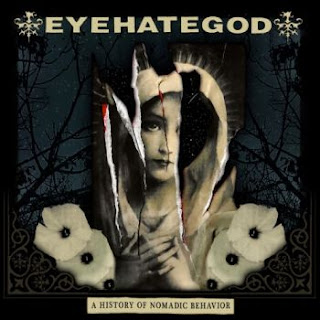 If you need proof of sludge's punk roots and you never hear Neurosis' "Pain of Mind" album then here is another band to support that theory. In fact, this album is more punk flavored than their earlier work. The vocals are spit out in a more coherent fashion rather than anguished screams. It's a snarling narrative. The production on this album is warmer and more organic. It is almost too clean. "The Outer Banks" is more metal, than the opening track. The riffs are much more angular. There is some Sabbath influence still in place but in equal doses as Black Flag. Not that this has not always been the case, there is just something about this clean production that makes it more obvious. "Fake What's Yours" has more groove to it. You would think Mike would be angrier than he is, but getting older mellows you out a little. These guys have no shortage of riffs as they fall out from one to the next. Not conforming to a verse / chorus formula.

"Three Black Eyes" is more explosive. There are doomier touches to this one , but anger is more of their currency, even when it is slightly dialed back. They do tap into their more feral side on "Current Situation" . This album is beginning to remind me of a less groove-oriented version of Rollin's " End of Silence" album.  It is apparent these guys are better musicians than they were when they put out " Take as Needed For Pain"   The album begins to take on a more uniform sound, even though it might be different than their previous material. There is more of a rumbling palm muted metal groove to "the Day Felt Wrong" which might be my favorite song thus far. The variations that do arise are things like the more blues based tones to "the Trial of Johnny Cancer". Though Mike's ranting begins to run together a little.

Sometimes this Sabbath if fronted by as less testosterone power Rollins thing works well " Circle of Nerves" is a case in point for this. And while "Everything, Every Day" reminds me the most of their older work, the ranting gets old and the song it self feels like it is running out of gas. I will give this album an 8.5, it was fun and worth the listens I gave it. if you are a fan you are going to fall onto the side of the fence where they can do no wrong or not like this as it does not feel like the old stuff. If you can listen to it for what it is you might be better off.