Appalooza : "the Holy of Holies" 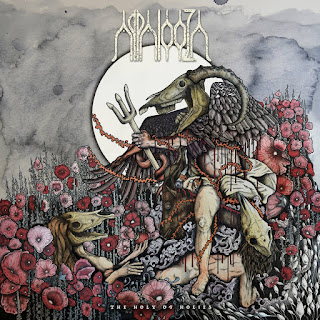 Grunge is not dead . This band offers a modern and sometime heavier take. The first song is not far removed from Godsmack in that regard. These guys are very dynamic and have a darker slant to their sound that is what sparked my interest. They hit hit that cool 90s post grunge rock that bands like Life OF Agony spring boarded from / Not as dynamic or intense as the opener, but a catchier song with hooky melodies that works even better . They go a more middle of the road approach with the more radio rock formula of "Reincarnation". It is still a solid song , just not as original in the over all grunge nature of their sound.

I prefer the more exotic sonic nuances they groove on with "Nazareth". It is also much more Alice in Chains, just more gritty vocals. The pounding drums of "Conquest" are more Sound Garden , though the song has a tightly coiled staccato groove to it .It might be the album's most metal moment so far. The go into more exotic chord progression with "Azazael and crunch into a more Godsmack like groove for the verse. No one is going to call them the most original  band. While their influences are worn on there sleeves it never feels like the barrowing to heavily. To be titled "Distress" it certainly is the most upbeat and happy song on the album. Kinda puts them in more Stone Temple Pilots territory. It is well written , even if it is too happy for my tastes. I can see where the guitar solo section would be fun to jam out live.

There is a darker , heavier , more heroin depressive vibe to "Thousand Years After" . The driving drone might sound good when you are high , but they have catchier songs. There is a weird circus like part in the song's third act that is different than any place they have gone thus far. The album closes with |Canis Majoris" is a grinding power ballad of sorts. It kind of drags and feeling like the drugs are kicking in and causing them to run out of steam. Even with that said, the front end of the album is strong enough to make up for when this formula wears thin by the end , so I will give this one a 9. I have enjoyed all the listens I have had thus far.