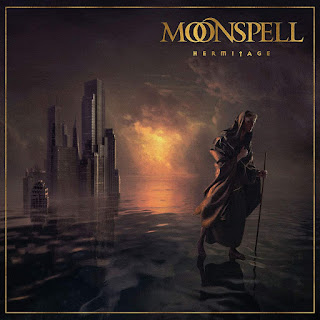 Once upon a time this band from Portugal used to be at the forefront of the goth metal movement. This album finds them no longer trying to be Type O Negative . The vocals have improved over the years. I have seen these guys a few times live over the years when they were opening for a band that I actually wanted to see and the vocals used to be a sticking point. Their singer knows himself better and continues to improve.    They are not as heavy as they used to be, but they have not lost all traces of aggression. It feels more progressive than goth or doom, though it is on the darker side of prog rock. The riff to "Common Prayers" is pretty metal. The guitar at the beginning of "All or Nothing' is kinda of wimpy then they go in a more blues based direction with it and it works. The vocals over the more strummed chord progression is less effective. The breathy vocals are very melodramatic, which takes away from some of the darkness. The clean production as does this to some extent.

They make more of an effort to get heavier on title track. What they do works better as the song progresses . The vocals could more oomph to them, but they are better than they used to be so I can not complain that much. But I am not going to say that what they are doing here really seems like the same kind of metal that bands put out in 2021. Things get to a more Queensryche proggy place with "Entitlement" . How ever the jammy edge to the song makes it worthwhile. This is the best their singer has sounded so far on this album. There is some great guitar playing on this album. Midway into the album I can hear how the year of Quarantine culture was the inspiration for this album. "Solitarian" is a jam that fall out of the previous song.

Despite the more aggressive singing "Hermit Saints" feels more like a rock song than a metal song.  On "Apophthegmata" they works in some electronic elements though end up in one of the album's more metal moments.   This also makes it one of the album's best songs. On "Without Rule" they pass up the chance to end the album on a heavy note. I mean as far as prog metal goes they come up with some stuff Opeth fans might like. Overall this album is what they set out to do. I might have wanted something heavier , but what they have done is impressive regardless and I will give this album a 9.