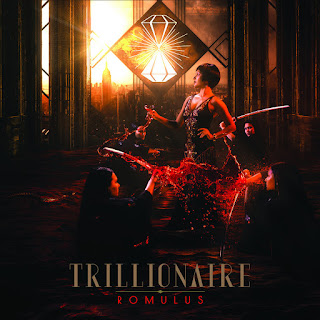 They are not too far out of the sonic spectrum of say the more prog latter days of Mastodon. The vocals are more ambitious. They fall somewhere between Pain of Salvation and Devin Townsend. There is some belted rock grit to them. The opening track does grow on me , but is not as good as the lead single "Dead By 25" is ambitious and more compact and catchy. The vocals are a little more toned down and serve the song. This makes the chorus punch. Is the delivery still pretty dramatic and vibrato filled? Yes. There is a more rock kick to what is happening here than your average modern prog rock.

"Underwater" is still well done. The vocals are way multi tracked across the board. This gives it a more commercial hard rock sound. This big production gives it a late 90s feel. The post grunge elements are strong. I really dig the way the vocals are spitting on " Yes, Mistress" . There is an impressive dynamic shift in how the song breaks down midway into the song. So far this is my second favorite song on the album. "Temple of Mercy" is the first song that kind of feels like filler as there is not much that stands out in the way of hooks to distinguish it from any other high energy hard rock band.

The album begins to run lower on gas in the creative department. Yes, the lead into "One in the Chamber' we as dreamy vocal. But this feels like it falls solidly in the prog wheelhouse and takes less chances. The melody does hook me. It is not a bad song, they just raised the bar high for themselves with the first three songs. They step on the gas for "We Are the Devil" . This one is more metallic in it's intentions. It almost reminds me of Anthrax. There is a proggy calm before the storm when they close the album out with "Northern Lights" . My opinion still holds the front end of this album is strong, great even, then kind falls into your typical modern metal/ hard rock, It is however even at it's most lackluster still well done so I will give this album an 8.5 .