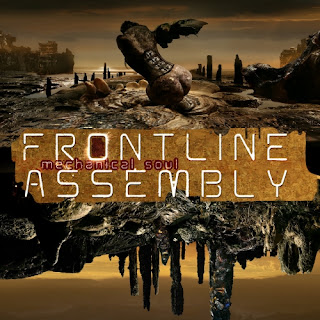 Much like many of my other favorite industrial bands who are not Ministry these guys are going in a more edm direction. Synths are up front and center. The vocals are what you might expect from these guys. I mean this is dark enough for me. It borders on dark wave. I am ok with the more synth-centric focus when they give it some heft on the second song. 17 albums in these guys obviously know what they are doing. I know Dino from Fear Factory is supposed to show up at some point in time so they are not forsaking guitars altogether. Their 7th album "Millennium" is my favorite. Jean Luc from Front 242 also appears on this album. I prefer the more melodic touch to the effects used on the vocals for "Unknown". At 54 Bill Leeb is still young enough that his performance is convincing. The vocals are mainly his trade marked tensed whispering .

If robots could trip on acid and make music the result would be the song "New World". I normally want these guys to be more driving , but I will accept this. The number of people surprised by the fact I like a song called "Rubber Tube Gag" should equal none. It has a pretty sexy pulse. The keep the sex factor in motion with "Stifle" . Here is also where the guitar shows up. This might be the album's best song. "Alone" works off a darker slinky groove. More about the creepy than sexy. Not that sex is anything I normally associate with these guys. A more Led Zeppelin like beat drive the more Germanic feel of "Barbarians"

The rest of the album offers few surprises m but is an exercise in this more club oriented sound they have evolved into. It is dark so I have no complaints. Does it measure up against their peak in the 90s , no. It6 is not unlike newer KMFDM, doesn't play it as safe as these guys and has sharper hooks. The grooves are great and pretty dark so I do not need much from these guys. Would I like more guitar . Yes. Is this their best album ? No, it is pretty solid at this juncture in their career so I will give it a 9. If you are a fan it's a must.