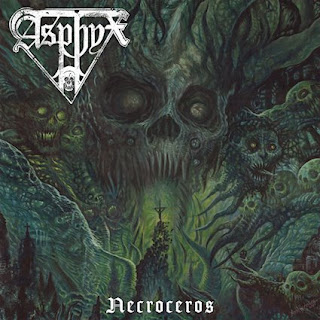 This is the band from the Netherlands  tenth album. They are not drastically changing anything. They are straight up by the books death metal. Old school death. Old school to the point their sound brings back the cross roads where death metal sprung from thrash. Yes there are a ton of bands playing old school death metal but these guys are the real deal as they have been doing it since 91. Martin Van Drunen is the only original member. They come on heavy then smooth out into a more mid tempo hooky songwriting style by the time we get to "Mount Skull" . Catchy song writing always wins out over sheer heaviness no matter what kid of metal we are talking.

"Knights Templar Stand" is another example of how just because the rule here is cool riffs alone do not a good song make , that you can do both. They put their cool riffs into a context of a functioning song. "The Years of Famine" is broken up by a melodic middle section where they guitar solo of sorts sits. It gives the dynamic shift needed even if this is not a catchy as the two previous songs. "Botox Implosion" breaks up the lyrical theme of the album. . It falls on the harder and heavier side of the equation for them . I think the more deliberate pace of " Blazing Oceans" is more powerful and proves faster does not equate heavier. It taps into what I used to love about the earlier days of death metal in the 80s & 90's .

The riff to " the Nameless Elite" is bad ass and there is no two ways about it. Please refer to my previous statement in regards to cool riffs/ I think this coolness is somewhat flushed away when they pour on the speed and sound like everyone else.  " Yeild or Die" is driven by a big riff, that sounds great , but the over all feel is pretty typical almost Amon Amarth style death metal. The title track that closes the album is more effective at you a head banging hook to lock you in. Overall original members or not this is a case of a band that made it work with the guys they had at them time. So far this is the death metal album to beat in 2021.