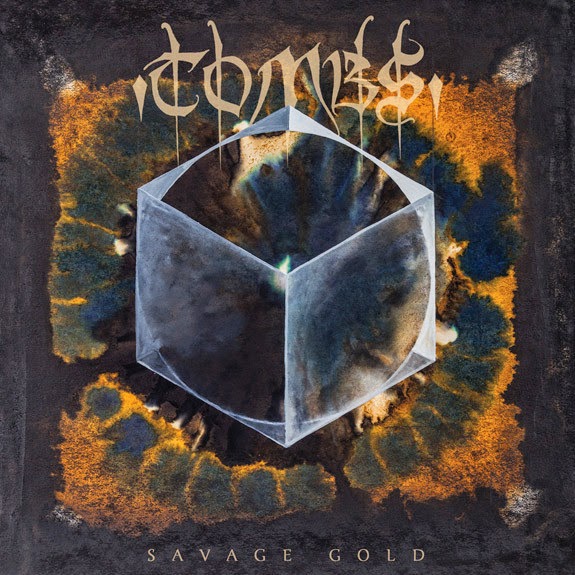 The first thing that strikes me about this change in direction for the bands is the precision, especially in the drumming that conjures forth a more Ulcerate like vibe. They lurch out of the darkness, so while I am happy the band retained their darkness, I am still worried they might have abandoned the post- rock leanings of the last album. Hill's rasp is more conventionally black metal setting it against a dense blend of doom and technical death metal.

"Portals" is more straight forward than the cavernous sound you might remember Tombs bringing in the past, in fact their is almost hints of thrash in it. It's metal not doubt, and retains the stain of the blasting.The arrangements have some winding moments of dynamics this one stay in a similar blackened sphere of heavy with varied levels of hooks coating the riffs. "Seance" is arguably more black metal than the previous track. The elements of shadowy melody  haunt this one is a manner that is more familiar with the sound you know these guys for. The groove creepier and the raspy vocals carry more purpose. The guitar tone thickens with the punches as the song drifts forward.

Fours songs in and my fear about the purging of post-punk from the bands sound is rectified."Echoes" the guitar gets gothy and his vocal tone takes on a more death rock like quality. It does eventually launch into a hardcore tinged black metal. This is also where I begin to notice some of his gruff vocals begin to sound like Neurosis."Deathripper" also indulges their darker side. The bass line takes a chilling chug and the guitar cuts like Robert Smith on "Pornography". The first hints of more Neurosis trickle in as the song builds, though Neurosis has similar Killing Joke and Swans influence.

The pace picks back up on "Edges of Darkness"/ This touches on the more hypnotic elements of black metal groove that Watain dabbles in.The meat of the song is a mean creature. It's equal parts dark and driving, which is a perfect combo in my book. Some of the riffs might be catchier than black metal is supposed to be if you are questioning purists. To me it's the dissonance that makes it black metal. At times the density and the tempo flirts with sludge but I recall this being present with the last album.

"Ashes" takes of on a rapid blasty course.The vocals return to the Neurosis like gruffness, almost painfully narrating. This articulation makes the lyrics stand out and the song touches on more sonic passages, which create even more of a Neurosis element though the speed of their attack counters this comparison.Sure it gradually gets even more Neurosis, but it also becomes hard to argue with the chug they take on.

They flip back and forth from the speed driven pound to a more ominous bellow on  "Legacy" that maintains the momentum of its forward charge while loses some of the more nuanced moments that come with such a sacrifice for rawness. The transitions from song to song are a little off. Sure it's fine how "Severed Lives" drops the bottom out to dip into a moodier moment with Hill singing rather than bellowing. The whispered moments are more Neurosis here.

The album ends with the pound of "Spiral". It comes as a blur that attacks with jack hammer like intensity. The blasting fury countering again the more Neurosis roar. The production is tight , not letting anything echo out like the last album and the drums benefit the most from this and show their chops as thanks.

I will give this one a 9 it's a fine chunk of metal, but I wanted them to dig even darker into their black hearts, some of the more Neurosis like moments left me puzzled with how to take them so this album might grow on me  in either direction.
Posted by Wilcifer at 11:04 AM