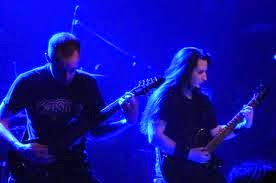 I had high hopes for this show. The Portland based band was pretty impressive when I caught them a few years back when they were touring to support "Marrow of the Spirit". While excited to catch Agalloch again, I also have developed a keen sense for missing openers, so made it to the Earl a little after ten. This is proably survival skill set in motion by my subconscious in hopes of conserving my hearing. So Vex was just a rumble coming from the other room while my girl friend ordered food. The crowd was a good size for the venue , on par with what Agalloch drew the last time I caught them at the same venue. 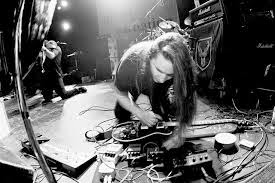 They took the stage with  lead growler Jon Haughm carrying a bowl of incense to create a ritualistic feel, though this was not done with the same dark occultic intensity as what say Watain or Atriarch do. I think it was more for the bands benefit to get them into the head space to preform. The bulk of their set was from the newest album. Bringing the front man to joke they were going to play something that no one wanted to hear from the new album. However they respectfully gave the fans what they wanted with a few tunes off "Ashes Against the Grain" and "Marrow of the Spirit", leaving "Pale Folklore largely neglected.

"So this is the future home of the zombie apocalypse" Jon quipped in his first interaction with the crowd." At least you guys get a cool show. We get Porlandia, which is almost a documentary." He later asked if we wanted to hear something from the Mantle. This brought a decent roar of approval. Jon then stated that they had never played "I am the Death of the Earth" in Atlanta before, though that fact wouldn't matter to people catching them for the first time. This song was also the only moment in the show where he attempted clean vocals. On the newer songs which have more layered growls, the other guitarist Don Anderson stepped up to the mic and lent his throat.

Playing for almost two hours, the band kept their energy level steady. The only dips were in the more ambient portions of songs which sprawled out into the more post-rock like middle sections. Drummer Aesop Dekker, who also drums for such acts as Vhol and Ludicra played a large part in the propulsion of the songs. His preformance really stood out. The veteran drummer had his signiture precision, but tirelessly handled double bass and blast beats. He made what he did look easy , despite the thunderous sound he created.

I have always felt lead guitarist Don Anderson is one of modern metal's most under rated guitar heroes. He once again, show cased the dexterous chops that he employs so tastefully into the context of what Agalloch does and works well with Haughm. They intertwined the sonic layers perfectlly. One reason for this also seemed to be a smart stage volume. They were loud, but also very clean tonally. Many metal bands make the mistake of cranking up their stage volume until the by product is a muddy swamp of distortion and no discernable notes. This was not the case with Agalloch, who made each guitar melody count. Anderson also took the lead when it came to the band's  stage prescene goes. He worked the stage in a manner most metal bands of their ilk would not have half the charisma to execute, without coming off as trying to hard. He seemed very natural. This left John snarling at the mic center stage. Both he and the bass player did not shy from the obligated headbanging when the dynamics called for it.

Overall they met might high expectations and continued to defy description, even with the reduction of clean vocals , the guitars compensated well when it came to melody. I would go see them again if they rolled through town next week. Though they tend to make summer jaunts due to some of the band's work schedules, so next summer it is. With that in mind make sure to catch these guys live when they roll through your town and it will embed your fandom if you have been on the fence with them in the past.
Posted by Wilcifer at 3:34 AM