Mastodon: "Once More Round the Sun" 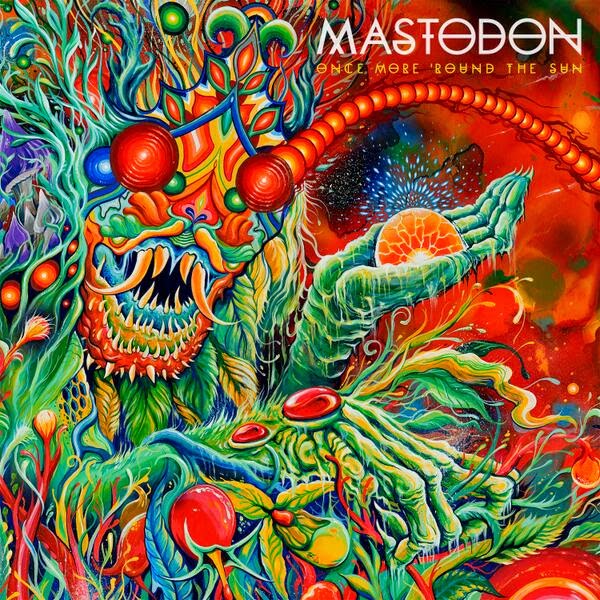 It seems like this album came out with less fanfare than their releases are normally heralded with. Though living in Atlanta it is kinda hard to gauge how the rest of the world sees the band. "Crack the Skye" has been my favorite album thus far and this album is a slight return to the more prog side , but with a more economic time frame when it comes to the songwriting.

The opener "Tread Lightly" opens with the strum of an acoustic guitar that builds into what you expect from these guys. The riff falls closer to some of Tool's more straightforward moments. They are much more metal than Tool, particularly in the bombast of attack when it comes to the guitars. The harmonies are much more calculated here, and leaning in the direction of past tour mates Alice in Chains, with the build in the last minute and a half reminding me of the Deftones. So touring is a big influence on these guys.

This is a very guitar oriented album, it seems like where all the attention to detail went was into their production and it shows as they sound great tone wise. The vocals are heavily layered, though the way the melodies fit around the riffs don't carry that same hooky sensibility of  previous albums from the era of cleaning singing. The exception to the rule is the very commercial "the Motherload" that would not sound out of place on a Coheed and Cambria album. It is however a pretty decent song , despite the blatant pop leanings.

The slick production elements are balanced out by some pretty meaty metal riffs on songs like " High Road". The melody on the chorus is rather Thin Lizzy of them, but works for this song. The title track retains the bands sounds but is much more of a rock n roll sort of vibe, even in such a way that it could fit on modern rock radio. They delve back into a more thrash like attack to the verse riff of "Chimes At Midnight". This song is decorated with a dizzying prog syncopation to the guitars dancing around the song.

There is a little more of a classic 70's metal feel to the groove of "Asleep in the Deep". This is not unlike some of the more moodier moments on "Crack the Skye". They stick to a similar groove so the prog doesn't really progress a whole lot on this one, though the one groove is pretty cool. "Feast Your Eyes" is a pretty straight forward rocker, speeds ahead like a Hawkwind song, building steam as it charges off into space.

Their songwriting clicks with me on "Aunt Lisa" as it has pretty much every element I like about the band. The twists and turns still retain the focus of the song. "Ember City" works in a similar fashion though despite some of the metal tension on the verses, it could almost be a burlier take on what Muse does.

"Halloween" feels the most like filler. At first I hoped this would be a cover of the King Diamond song of the same name from Fatal Portrait, but no such luck. The chorus works , but nothing else really catches me on this one. They close out the album with the longest song 'Diamond in the Witch House" , which is darker than the rest of the album. It doesn't cover any new ground, and is the obligatory Neurosis crossover. So it takes the band a little closer back to their roots. Overall I don't dislike this at all, some of the songs I don't hear sticking with me, so I will give this one an 8.5.