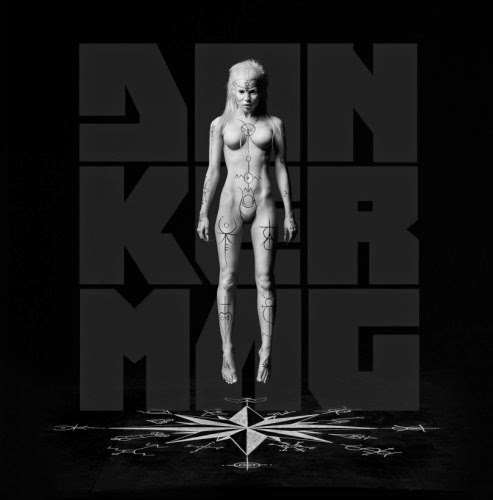 The anticipated follow to their last album "Ten$ion" that  kicked doors open for them. They have more to prove here . They need to show that they are not just a novelty, but are able to make lighting strike a third time. I am not looking for them to become serious artists, but to at least make something as fun as what they brought to the party last time.

"Ugly Boy" is more electronic than it is rap, with Yolandi singing in a mock Asian manner.The synth line leading into " Happy Go Sucky Fucky" hearkens back to Lords of Acid's "Lust" album and many of the albums sounds return to the early Rave til Dawn days.  The second verse finds more originality in Yolandi's approach.

The interlude skits almost out number the songs."Raging Zef Boner" is a silly as something from the first Marshall Mather album. The reggae inflection of this one does give it more of its own identity as long as this is is the only flirtation with this style. They do switch it up and go with more of a dance hall feel on "Girl I Want 2 Eat U". Ninja's raps work better on "Raging Zef Boner" , but this one isn't a fast forward classic.

As far as the singles we have already heard I prefer "Cookie Thumper" over "Pit Bull Terrier"  and hearing the album versions of those songs doesn't change my opinion.Things get weird when they shift into the slow jam of "Strunk". This is not really a direction I would encourage them to go into, but the novelty on it works for this album. Setting a song like that before the darker " Rat Trap 666" works really well in the albums flow. This one reminds me more of something Tricky might have done at one time.

"I Don't Dwank" has one of the albums best beats. Yolandi's rhymes do it more justice as Ninja seems to be dialing most of his verses in this time around. Things drop down into a more bubbling chill beat , that Ninja redeems himself from his other lack luster flow he showcased earlier in the album, but by this point I am well aware this is not going to rock the house as hard as the more focused "Ten$ion".The interlude "Moon Love" had some interesting sounds that could have been turned into a cool song , so it leaves the title track to decide this albums fate.

It starts off with Ninja once again trying to sing. By first minute and a half you are waiting for the beat to come in rescue this song.It is the sort of thing some one like Zola Jesus could have soared over , as the dark synth accompaniment is well crafted it just doesn't work for Ninja's voice or lack of one.

I'll give this one a 7.5, as it has its moments and even a few really cool songs, but I think despite the improvement in the backing tracks they are doing their thing over, these guys are capable of doing better as they have already shown us.
Posted by Wilcifer at 8:04 AM