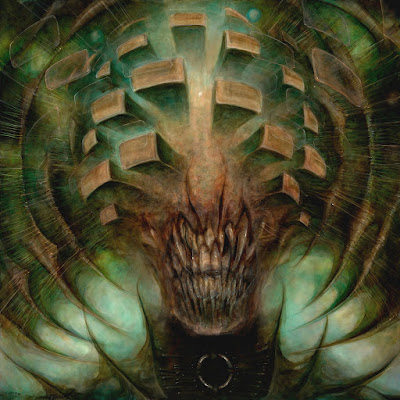 The first song "Soothsayer" proves to more powerful than the other wise more technical "the Idolater" that follows it. There is some groove hidden in the rubbery bass of "Galgothan Tongues". Things seem to also speed up on this song and clean vocal slide into the background. They mathematics are in your face , but there is enough attack to distract you from this at least three songs in. The vocals fall into a angry snarl that's more of a mid range. They throw guitar solos at you sometimes more sparingly and to be such a proggy death metal band there is more rock influence on this album than expected.

I like the dissonance that opens the reluctant beginning of "Divine Anhedonia". It takes almost two minutes of angular wind up before they get into a Cynic like place. This  accelerates and eventually finds a thrashier groove with brief clean vocals at the end. When they lash themselves into " Devotion" this also finds them returning to the more late 80s thrash sound. The proggy leaning and death metal malice I think are obscuring the fact that these guys work best as a really adventurous thrash band. After this there is a guitar interlude that really seems like it is more the intro to the last song "Obolus" , but I get why it was tagged onto it , because that would take the song to over the ten minute mark. These guys are really good song writers as they cover lots of ground at the longest song "Obolus" that ends the album is the only one that touches the eight and a half minute mark.

"Obolus" is the first song that I really pay attention to the lyrics. The vocals are snarled in a more discernible manner. There is almost more of a hard core aggression in how they are spat out. They are very capable of pulling out some catchy head banging grooves so it's not all math and mirrors. I have grown to like this album a little more with each listen I give it . With that said I am going to round this one up to a 9. Which makes it not a flawless classic , but head and shoulders over most of the death metal I have heard this year and I have heard a lot as I am trying to get caught up for me end of the year lists. If you like your death metal to challenge you with it's high dexterity score then this album is a must. It's even a must for just plain ole death metal fans.