Failure : "In the Future Your Body Will Be the Furthest Thing From Your Mind" 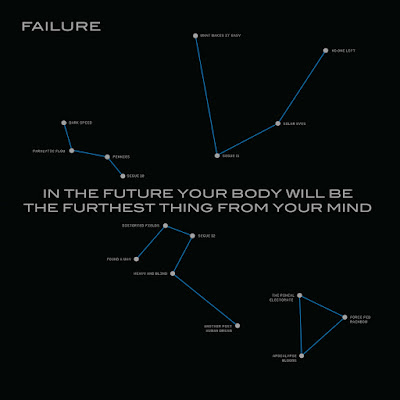 The first song is an odd indie rock ditty that also most dancey and has little of their classic sound. This problem is solved on the second song" Paralytic Flow" which is true to form for the band. The driving bass line of "No One Left " is more convincing than the dreamy laze of "Pennies" that falls before it. There is a decent groove to "Solar Eyes" which is consistent with what the band normally does. "What Makes It Easy" almost sounds more like Pinback to me. Despite the mellower mood, it's a decently written song, that makes me want to listen to Pinback. "Found a Way" is not as innovative as it sounds like straight ahead Foo-fighters like grunge.

They work best with the bass line taking charge. There is a more detached almost Gary Numan like feel to "Distorted Fields". The groove to this song works really well. They do get some interesting guitar tones on this album. I had to listen to "Heavy and Blind " twice to really get the feel of it. It leans more towards the more introspective indie rock side of what they do. "Another Post Human Dream" sounds like the title , but it also bores me. "Apocalypse Blooms" is not a grooving rocker, but it still works . "Forced Fed Rainbow" has more sonic heft to it.

There is more of a Beatles feel to "Pineal Electoral". It stars off just piano and bass. While it's not a " Nurse Who Loved Me" and pseudo political , the song it self is well done as far a Beatle influenced rock goes, though that is not the first thing I want when I think of these guys . I'll give this album a 7 as it feels their personality which made them Failure is compromised to some extent.

Email ThisBlogThis!Share to TwitterShare to FacebookShare to Pinterest
Labels: "In the Future Your Body Will Be the Furthest Thing From Your Mind", 7, album review, Alternative rock, failure, rock