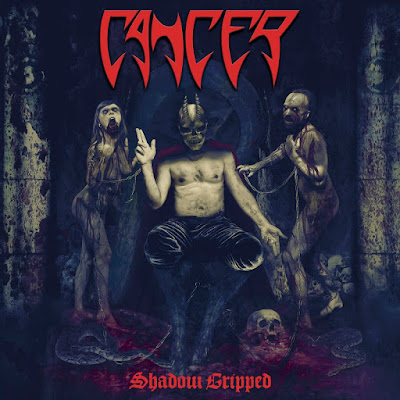 I remember listening to this band in high school, they kind of came in at the heels of the first wave of death metal. They have returned after 13 years of silence. The album opens with a commanding chug, but gets mildly less catchy when it comes to stepping on the gas like they have something to prove. Like many death metal bands when they can restrain themselves they work better in their more deliberate moments. This is a common problem with death metal and even some thrash bands , making things seems almost rushed when they stomp onto the speed. "Ballcutter" doesn't bring anything new to the table , but the more mosh inducing riffs work more for me.

"Organ Smasher" has a darker tone to it's aggressive chug. "the Infocidal" pretty much chugs along the tried and true death metal path. With this comes a single minded monochrome aggression and nothing that really gives it it's own identity.  The guitars are the strong point of their sound. The drummer gets the job done, but nothing over the top enough to solidify his playing in my brain. There is a little more atmosphere added to the intro of "Half Man, Half Beast" but nothing better or different than what Morbid Angel has already done. I do like the way the riff carries a meaner stomp. This creates a groove that helps it stand out from the other songs. The lyrics are growled in such a way that they are certainly discernible.

If you are going to pick up the pace then they go about it in the best way they could on "Crimes So Vile" as it doesn't forfeit the power of the chug they have built. The vocals vary a little in their lower to mid range rasp on this one. "Thou Shalt Kill" is another song that might not attempt to reinvent the wheel, but what they do is so well executed that it makes up for it. The title track starts off as more of  speed fest that is less impressive than the previous song , though they eventually rein this one in. "Disposer" works perhaps the best since the opener as the dark throb it works off of gives this one a much different and more melodic feel than what we have heard thus far .I'll round this one up to a 7.5 , it's far from the best death metal album I have heard this year, but if you are a fan of the band you will be proud that these guys still have it.