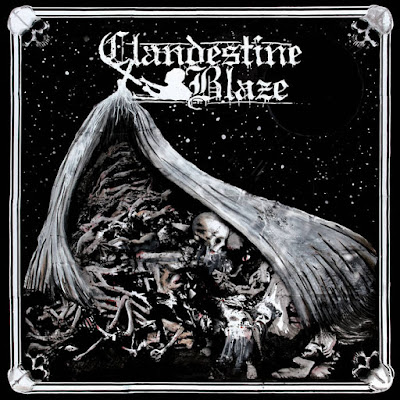 While this touches on the raw black metal that seems to flourish in Finland, there are more musical and atmospheric elements than the bulk of that. This is not to say this album doesn't face some of the same production issues that more raw black metal bands have. They just have enough attention to detail to work around it. One thing plays into this projects favor, they do more than play blast beats. Granted sound wise the drums are the weak link. The vocals are in a coarsely garbled mid range. You can kind of understand what he is saying. In this way there is a great deal of similarity to mid-period Darkthrone. Since this is a one man show, drums are not his strong point, but the drums are passable and organic not, just a drum machine. It's clear when it comes to drumming he is influenced by death metal in the way he uses his double bass.

All that stuff I said about not using blast beats gets blasted out the window on "Blood of the Enlightenment". At this point it begins to sound more like run of the mill black metal and I start to get bored.  "Tamed Hearts" at least doesn't start off with blast beats which gives me hope and the stomp it does lurch into could be promising. There is some dissonance to the main riff. The title track starts off with clean guitar and overall is nice and darkly melodic, while still being black metal. This song winds around a lot of corners over it's almost 9 minutes.

"Triumphat Empire" has more of a regal gallop. The rough around the edges guitar tone keeping it more solidly on the path of black metal. It does pick up the pace of it's gallop , which is fine as anything that is not blast beats works for me. I'll give this one an 8 , though it's still to meat and potatoes for me to listen to on a regular basis , I respect what is being done here.