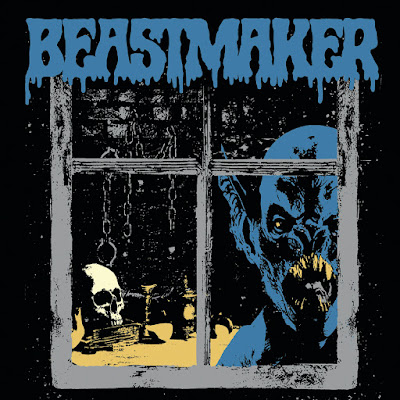 This is compilation of the string of EPs they recently released this year. So for me it works better just to have this album than a bunch of EPs. It is darker and creepier than previous releases. The vocals are a little more Ozzy like than I remember from the first album. "Inside the Skull" didn't catch me as much as the first album. I like what is going on here. It's dark and heavy with thought and hooks put into the song writing. It's when they begin to sound more like a New Wave of British Heavy Metal band that it slips into the kind of thing I was not as captured by on "Inside the Skull". With that said "Spiked Lined Coffin" is not a bad song I just don't feel it as much as the first two.

They redeem themselves with another solid blend of melody and shadow on " Demon Witch Child" which reminds me of a darker take on St. Vitus. This is the strongest song so far not only of this album, but the band as a whole. The songs are all very compact. They don't need to drag out things past their expiration date. "Sirens Kiss" gets a little weighted down by its riff. After the song before this they had already raised the bar on themselves. The do speed things up a little and go into more of a Iron Maiden type gallop. I am not opposed to them wanting to breathe new life into classic metal sounds I just think they do a better job of this when it's more natural. "Spread Your Wings offers an excellent example of this. The stalking chug of guitar never crowds anything.

"Mortal Souls" finds the pace picking up a little . The vocals are not as distinct here. They throw the book of doom riffs at you on this one. To their credit this song has one of the more fluent guitar solos. "Carnival" chugs at you with more command. I'll give this album a 9 , it shows the band growing in a better direction. They still have some of the NWOBHM drive and chug in their big guitar sound, while maintaining a  sense of darkness that keeps things from being slathered in the cheese of yesteryear.