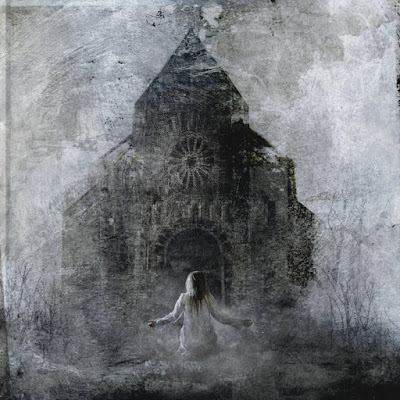 Here is an interesting album from a band out of Canada that blends several dark shades of metal. It begs the question is the blackened doom in this equation more doom or black metal? The album opens in a very mournful and melodic manner than might lean in a more of a Type O Negative or My Dying Bride direction. Then takes a more jarring turn in terms of intensity as they throw themselves into black metal going into "Desolation" completer with rapid fire blast beats. Not relentlessly as the do slow into a double bass section and the dramatically sung baritone vocals return. The tone slows back down even amid the fierce snarling in a return to doom on  the title track.

"Child of Light" has clean guitars going into then builds at a more doom paced swell. The growled vocals trading off with the sung vocals. The accents are very nuanced and well executed by their drummer who really earns his paycheck and has plenty of room to shine while serving the songs. There is also elements to this song that remind me of a heavier Woods of Ypres. "Broken Hymns " at least takes you on a melancholic journey before hitting the more blasty black metal part. Even then it's done with some dynamic contrast. "Voice of the Winter" has a bleak folk element to the strings that reminds me a little of My Dying Bride. They invoke some pretty masterful dynamics , without dramatically changing the throb this song works off of.

It ends with "Becoming Intangible" a fitting close close as in many ways it encapsulates what they do best as a band. You can't tell if it is going to be a mournful ballad or they are going to throw every bit of fury at you, and the answer is they do both. I'll give this album a 9. If you like black metal and bands like Woods of Ypres and My Dying Bride, then what are you waiting for?

Iris by Altars of Grief
Posted by Wilcifer at 6:19 AM