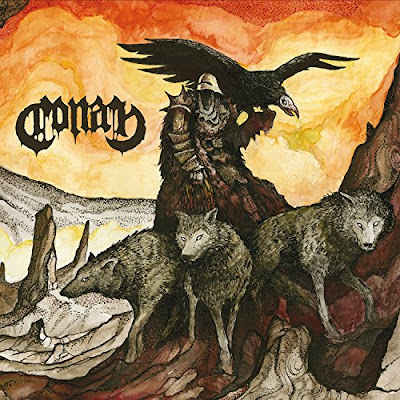 The  new album by this trio from Liverpool opens with  a wrathful rumble, moving at a faster than Motorhead speed. The dual vocals split the difference tonally with one gong for a coarse lower bellow and the other a crazed higher cry. It slows for what could be the chorus. "Thunderhoof" is like a slower version of the first song. The vocals use a similar pattern to yell out the lyrics buried in the fuzz of distortion. This feels more like sludge than doom or stoner metal. The guitar eventually finds a more mournful melody as the song progresses. The bass hits  flatulent subsonic brown tones over the pound of the drums. There is a more scraping drag to the tempo of "Wrath Gauntlet" . The vocals come closer to singing. They are sparser and bringing more focus to  the over driven effects heavy  churn of guitar. The lower growled vocals come in midway into the song. It's not really a chorus just another progression that drones out until the end.

There is a blast beat introduced into the intro of the title track , that seems a little out of character for the band, until the find driving groove. On this song you begin to realize how good their drummer is Aside from tempo the album remains one dimensional when it comes to melody and veers from one rumble to the next. This doesn't change , but only becomes more deliberate in the pound of " Every Man is an Enemy". Here cadance of the vocals becomes more syncopated and flirts with singing. Here the vocals still seem like an after though rather than a crucial part of the song. The bass begins to indulge in a weird phase like effect that might be a moog pedal plug in added in post production or the actual pedal since they do have a more organic sound.

The album grinds to a close with "Earthenguard" The slow creep here is the albums most doomy moment though the murk of distortion doesn't lend it self to being the albums most memorable as the lower vocal randomly roars out.  I paused this song midway to go work out came back to my desk and picked up where I left off to find that nothing changed it was just droning on for another six minutes. So while there are some heavy sounds here and solid musicianship, I could have used a little more to pull me into the songs , but will still give  this one a 7 for their honest effort.This slab of sludge is being released by Napalm Records.