Wake : "Sowing the Seeds of a Worthless Tomorrow" 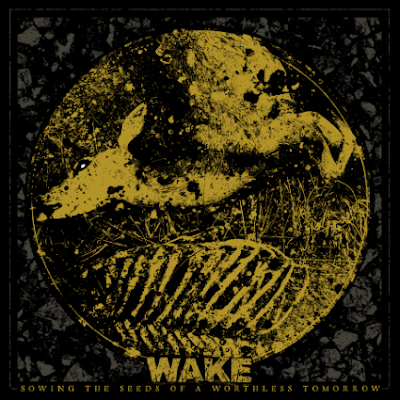 If asked what the next big trend in metal was going to be , I would say grindcore. While it has had a strong underground following every since Napalm Death reared it's ugly head, it is building steam to press into the mainstream metal consciousness. A more punks grow up and into metal the ground is fertile. Canadian bashers Wake might ride in on this wave as they have enough teeth and a dark dismal sense to them that works well in the current climate of today's metal. They hit you with blasts and let you breathe in the cracks their explosion creates. They are not to be listened to if you have a hang over or even a mild head ached. In fact in need at least a half cup of coffee in me to appreciate their spastic attack. If it was not for their darker dissonant side that allows this sliver of ambiance to creep in I don't think these guys would be my thing. While "Drones" has a more metallic riff they attack it with more of a crazed punk fury, before allowing it to groove. I think the transition from black metal to this brand of darker grind core is a natural one for those who prefer the more straightforward intense blast beat heavy brand of black metal. As song writers these songs are in and out in under three minutes.They to do not jerk you back and forth with roller coaster like transitions. "Better Living Through Apathy" relies on speed more often than not with a slight embellishment of the riff twisted around in brief accenting bridge sections. It should be no surprise if you are a regular reader of this blog that the more straight forward moments appeal to me less than the more depressive sections like the opening of "Low" which is onto something cool that gets blasted away and then redeemed slightly when they hit it with a Converge like aggression. Sometimes the lyrics make it through the chaos. A song like "Unrelenting Hate" doesn't do much to win me over. The drummer is rabid monster, and this album sounds great, but they make actual much when it's dialed back just a few degrees. When it becomes a blur then it's hard to hear where a song like "Vultures" begins when coming out of the previous one despite a cool stompy riff. However the rule here is cool riffs alone do no make a good song.


They are strongest when at their most deliberate and you can make out things like actual bass lines. I'll round this one down to an 8, because at some points when they are locked in the thrall of the speed fest everything begins to sound the same. Playing the album on a loop, when it restarted I lost the separation between the fist song and the second, meaning they did not have anything dynamically to make them stand apart. These guys are angry beasts and have captured what they do really well on this album. Perhaps this band and many other grind core bands coming out these days will continue to press forward and explore new places to take the genre that will be even more interesting and make me more compelled to listen , but it succeeds most of the time in the angry explosion this music is meant to be.
Posted by Wilcifer at 7:22 AM