the Howling Void : "the Triumph of Ruin" 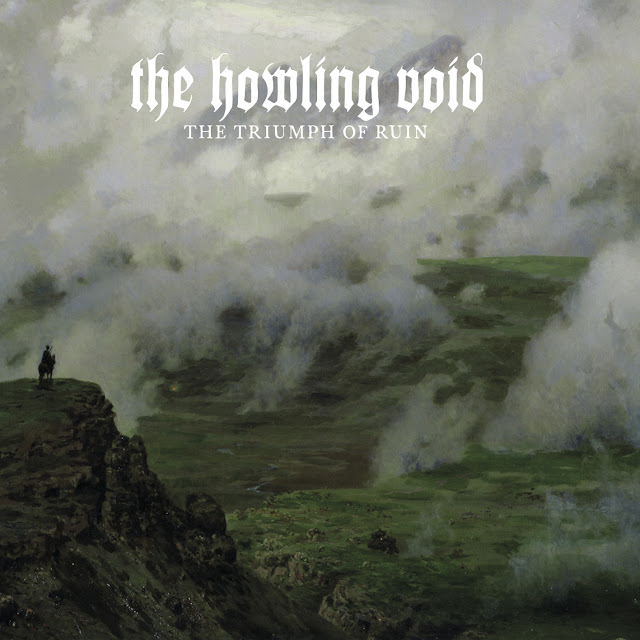 The album cover doesn't lie. What is inside sounds just like that images appears on the 5th full length from this one man project out of Texas. The album opens with a weird mix of tremolo picked guitar running over a track that is otherwise doom paced to create a unique dynamic tension. The vocals are sung , but low in the mix and used more as a passing texture. At the onset there is more of a black metal feel to "Looming Darkness" though the melancholic doom undertones are still present  and eventually rise up and over take the black metal feel.  This album is well produced with a really big sound. The vocals stay in a similar place as they did on the opening though slightly more commitment. The guitars swell into a powerful chug comings out of the tremolo trill. The instrumental "the Nine Worlds Wept" finds the symphonic elements coming to the forefront and creating a balance of atmosphere against the big cinematic metal backdrop. The clean vocals come further to the forefront to create a Opeth or Agalloch like vibe on "Fenrir" . This album is much more mature that what I remember of the previous albums. Doom begins to take over as the tremolo guitar begins to appear less frequently.

"Where Once a River Flowed" doesn't find any more new concepts being introduced. Things are dropped down to a more atmospheric place as the tension builds. The string arrangements on this song really compliment it. Things build back up in the manner you expected they would. I did not expect for it to drop down into just ambient synths so there are some twists and turns that don't always lead to the most obvious places. Things close out with the moody atmosphere of "Silence After the Storm". It never builds into anything heavy, which is fair enough since that would follow too much of a formula. This is a beautiful album, it walks the line between black metal and doom, with the doom side winning out so if you are a fan of either genre then this is worth a listen. A word of warning to those who prefer the harsher side of either genre , this album really cares about it's lushness which might not have the edge you are looking for but I'll give it an 8.5 and see how it grows on me.