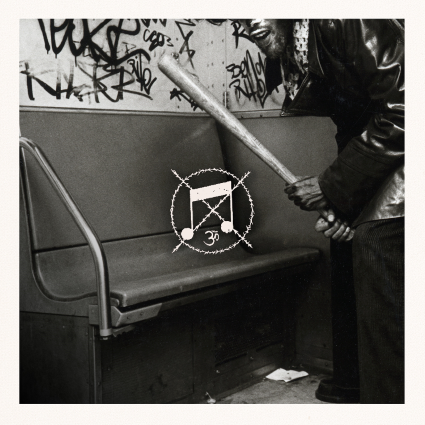 If the next big thing in metal is going to be this new hybrid of grind core then this band from D.C is going soon become a household name among todays' up and coming head bangers. The blast into these short bursts of songs with more of a punk rock anger than say the lower tuned Nails. Power violence and hard core are two of the other driving elements to their sound. Keeping their songs in the two minute range , this is a brutal  wham bam thank you slam. By the fourth song it starts to bleed together to me. Some riffs hook you in better than others. "Sacrificial Hire" is the first song that has enough groove to draw me in. The vocals are lower and coarser on this one. At a minute and a half the are pretty economic song writers. They jerk your neck around , but also allow you to soak in the beating. "War For Resources" is too straight forward for me. The song is fortunately only a minute.

Their first real epic is the three and a half minute "Black Banner". They have an impressive guitar sound, that is very organic and helps sell a song like "Hara-kiri" , it's the temptation to rush into the blast beat that is the band's fatal flaw. This is evident in the rushed "Stale Affairs" .  "Regressive Agenda" is a good way to describe their sound. This band is already popular with punk rockers who have grown out beards and now disguise themselves as metal heads. Midway into the album many of the songs begin to sound like it just depends on what tricks they are pulling out if the song can gather its own personality. They have the potential to crush you , as displayed on the slower "Unit 731". "Icaro" could be one of the many songs that has already been blasted past me at this point in the record. The same could be said of "Huysani Handschar" which catches a more memorable section midway into the 74 seconds of this song.

"Pharmacide" closes the album and it doesn't really offer much that we haven't already been hit with at this juncture. They crammed 15 songs onto this album, which should give you an idea of how fast these songs blur by you. I'll have to round this album down to a 5.5 , just off the basis that these songs go by in one speed induced blur. The vocals are a shouted/screamed, you can hear that black metal has had an influence on these guys, but they still play it pretty safe and this album has a dirty tone, but I would not say it's dark . If you are just starting to get into this kind of thing  and don't want to go as far back as Napalm Death, then this album would as good of an entry point as any of the new wave of grind core.