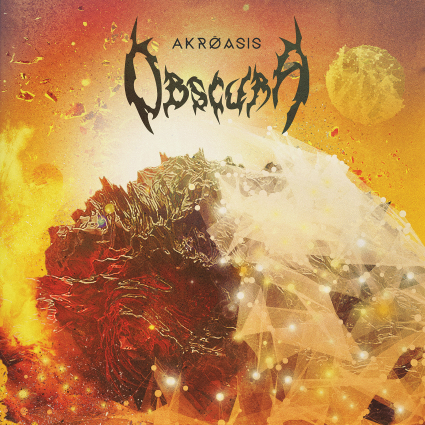 So tech death is normally not my thing as it often sacrifices the heaviness of death metal for flimsy tones and with digitized distortion that just doesn't hold up against the darker and more gritty sounds I prefer from the genre, but I though I might give this German band a shot and see what happens. There is more balance on the second song which comes across as being heavier even with the melodic cleaner guitar tones mixed in a the effected sung vocals. The opener just kind of blew by me with the only thing standing out the fact the vocals were more of a mid range rasp than what I expected. "the Monist" has clearly more thought put into it. There is a slight thrash edge to the title track which finds the bass walking all over it and the solo as the centerpiece. Aside from that it's pretty much color by numbers galloping with a side of sweep picking.The vocals seem to be more of an after thought on this one. I had to click over to realize "Ten Sepiroth" was another song, the robotic Cynic vocals re-surface, but for a progressive metal band these guys keep spinning in the same circles. When they dig down into their guts to churn up something with more Morbid Angel like balls to it on "Ode to the Sun" it makes all the other shred trapping more worthwhile as their is more of a pay off.

"Fractal Dimension" finds the lower growled vocals back, but not as effective without the band congealing around them to support the punch they are trying to pack. I can hear a little Cynic here, but Cynic are just better song writers. The riffage on this one is not very interesting. The guitars stumble over a few melodies here and there , but even the solo sound devoid of any feeling here. There is an almost djent like riff that at least adds some groove for a second to pull me in even though that is normally not my thing. "Perpetual Infinity" starts off more melodic, but eventually finds it self racing off . There is an under current of atmosphere that simmers under certain passages. "Weltseele"  finds the band regaining their balls. If you are playing a hundred notes and they do not have power behind them they are useless, so when theses guys dig in and put some intention behind their chugs they are in fine form.  At fifteen minutes it does make we wonder how long these guys can keep it up. I like when the sing actual notes using the rougher vocal tone. At the midway point they dip into a symphonic section that leads into a spoken words section that puts the breaks on the momentum the song had gained. There is a slight mosh element to the riff they come back with, but it's not as heavy of a pay as they need after the breather. There is a a groove that reminds me of Sigh following this winding section.

At the end of the day the melodic playing of the bass and the few more thoughtful song make this a better album than I expect from this genre, while the tone was much better than their more modern peers, these guys stumble into the same pitfall many bands with a fetish for shredding do and lose you in the manic ego fest instead of locking into something with the power to make you bang your head. I'll give this one a 7.5.